COMBILIFT HAS delivered the largest multidirectional forklift to come off its production lines so far to modular data centre manufacturer BladeRoom. 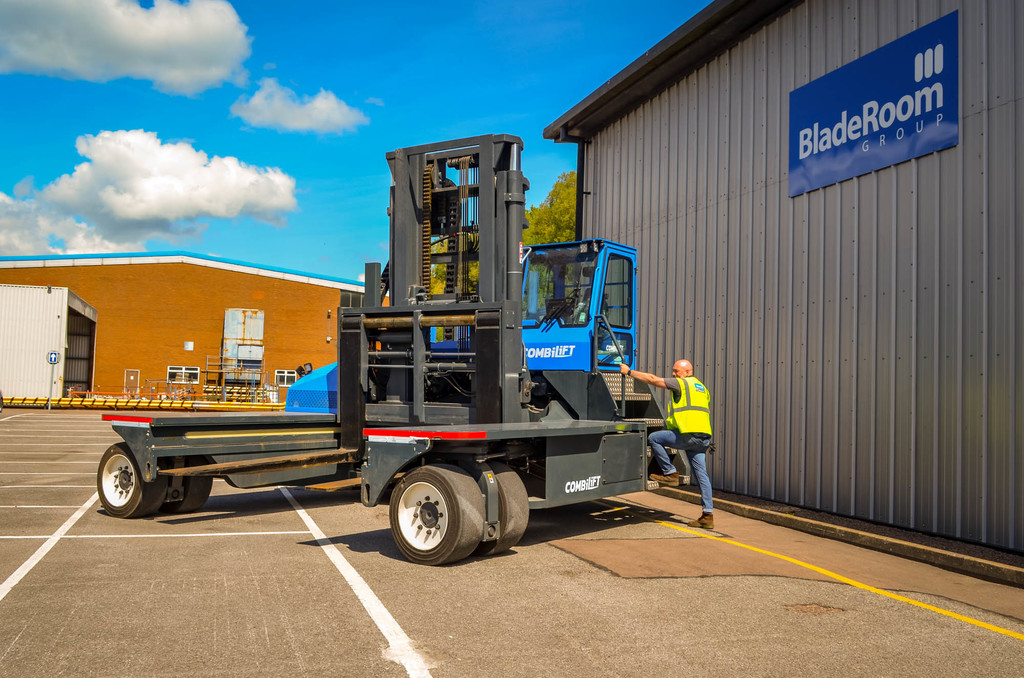 The giant 30t capacity C30,000 truck is now in operation at BladeRoom’s factory in Gloucestershire, where it is ensuring the efficient handling of components for its server rooms, as well as the finished products, which are comparable in size to shipping containers and can weigh up to 19 tonnes @ 1200mm load centres.

This is a “second first” for BladeRoom, as it ordered a 25t C25,000 model in 2010, which was at the time the largest C-Series that Combilift had built. This is still in operation at the Mitcheldean factory, along with a number of other Combilifts of varying load capacities, which handle raw materials such as RSJs and roof structures.

“The initial challenge for BladeRoom was how to easily, quickly and safely manoeuvre these extremely large loads in and around the site,” said Rob Perry of HFT Forklifts Ltd (Hereford), BladeRoom’s MHE consultants and Combilift’s dealership in the area. “Fixed cranes would have been too inflexible, and the sheer physical size of a counterbalance forklift capable of moving these structures would have taken up far too much space in the manufacturing area. Following the successful operation of the C25,000 over the years and the growing size and weight of the data centres, BladeRoom decided to scale up its newest Combilift.”

The C30,000 measures around  5m x 5m, has a wheel base of  3725mm and is fitted with a John Deere Diesel 127 kW (170HP) engine, and also incorporates customised features which enable the safe and stable lifting and transportation of BladeRoom’s very oversized loads. These include 4 cameras  (one of which is a reversing camera), with two camera monitors in the cab, red danger zone lights and a tilt indicator in the cab display.

“It’s a very impressive piece of machinery”, said Rob, “and in spite of its size, its 4-way ability enables it to move easily around the manufacturing facility. We are very proud of the fact that HFT was instrumental in supplying the largest Combilift C-Series model, not just in the UK, but worldwide.”