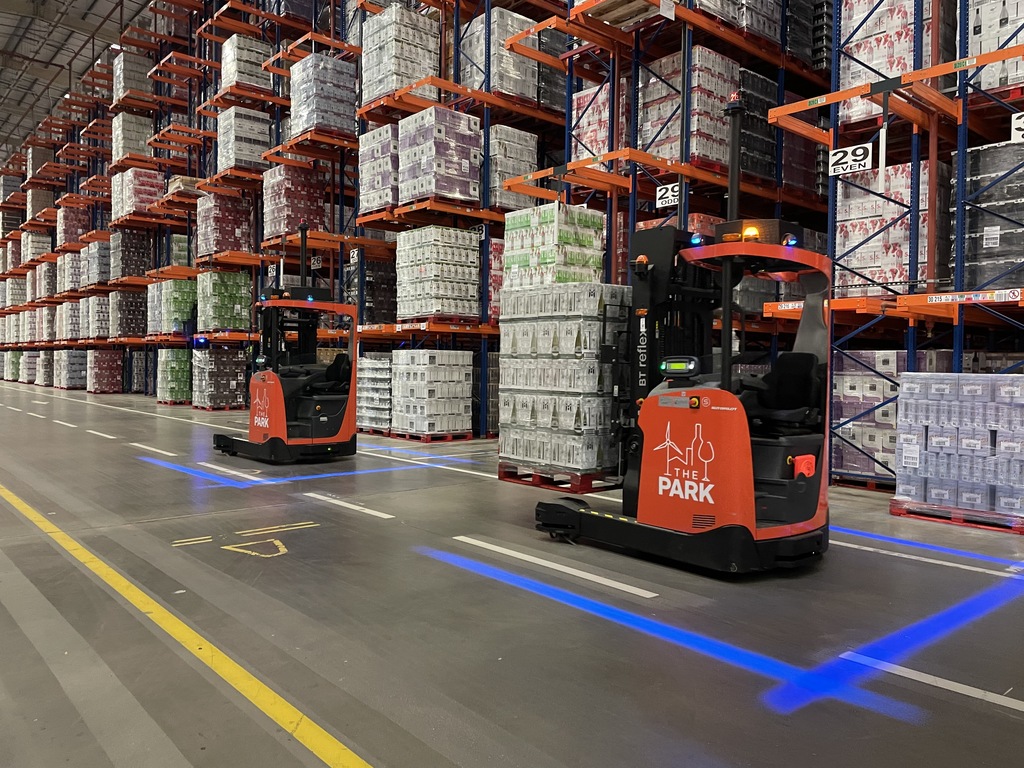 AT THE Park - the UK’s largest independent wine bottling and storage facility - the introduction of a fleet of automated reach trucks and Radioshuttle technology supplied by Toyota, has improved throughput efficiency, reduced labour costs and helped to overcome the problems associated with the increasingly difficult task of attracting and retaining qualified and proficient forklift operators and other warehouse personnel.

Following a strategic review of its drinks, manufacturing and distribution facility in Bristol, Accolade Wines – a leading global wine-making company whose portfolio of market-leading brands includes such popular labels as Hardys, Echo Falls, Banrock Station and Kumala – set about reconfiguring the site as a fully-automated contract beverage production and packing unit.

Located at the mouth of the River Severn, the facility – which is now known as The Park - has been transformed into a fully automated operation capable of supporting future growth and reducing labour costs while delivering a complete drinks solution for the European beverage sector.

The Park’s general manager, Richard Lloyd, comments: “This investment, coupled with others, has given us a phenomenal scale to offer a range of services to other drinks companies with whom we have synergies. By working in partnership with someone that can handle their logistics, packing and warehousing needs, our clients can focus their energy on creating brands. The Park, handles every aspect of their fulfillment operation.”

The extra volume provided by The Park has been welcomed by the UK and European drinks industry. “More than 40 per cent of all the wine that arrives in Britain is estimated to be brought into the country in bulk tanks before bottling for the simple reason that it is possible to fit close to two and a half times the amount into a shipping container if the wine is stored in a bulk tank rather than bottles,” explains Richard Lloyd.

“With the UK’s existing contract bottlers either at, or close-to capacity and the amount of wine shipped this way only likely to increase, the arrival of The Park is good news for the beverage sector,” he adds.

Almost half of the total sum spent on redeveloping The Park was invested in automating key aspects of the site’s empty bottle storage system and upgrading the manually-operated reach truck fleet that serves the site’s high bay finished goods warehouse.

Toyota Material Handling planned and delivered the project and supplied the manual forklifts, VNA forklifts, automated reach trucks and the Radioshuttle technology that is at the heart of this ultra-efficient handling and storage solution.

Eight Toyota Radioshuttles operate within The Park’s high-density empty bottle storage system. The load carriers automatically place or retrieve palletised loads of empty glass wine (and, of course, other beverage) bottles within the racking. In simple terms, they shuttle pallets of bottles backwards and forwards within the racking, allowing them to be loaded and unloaded to and from the storage cube by the automated Toyota reach trucks in a first-in, first-out (FIFO) pattern. For optimum flexibility each shuttle can be moved between lanes within the racking as required.

In essence, palletised loads of empty glass bottles arrive at The Park from various suppliers on curtainsided lorries. The curtainsiders are unloaded using manually-operated counterbalance forklifts which deliver the pallets to an allocated drop-down position within the in-bound marshaling area. Once incoming pallets have been deposited within the goods-in zone an order is triggered and the fully automated reach trucks are sent to collect loads in a pre-arranged sequence and deliver the empty bottles to the in-bound face of the high-density rack system. Automated reach trucks place pallets on to one of the Radioshuttles which then delivers the pallet to its designated position within the storage system.

The empty bottles are stored in the high-density Radioshuttle system until such time as they are needed in the bottling plant, at which point an order is created for the type of SKU required and a Radioshuttle is instructed to retrieve an appropriate pallet and deliver it to the waiting automated reach truck. The automated reach truck delivers the empty bottles directly to The Park’s production area.

Once bottles have been filled, finished loads are taken from the bottling plant by the automated reach trucks and deposited P&D stations within the high bay finished goods store before being put-away by the Toyota VNA trucks.

One of the main drivers behind the decision to automate elements of the intralogistics process at The Park was the fact that companies across the European logistics sector are finding it increasingly tough to attract and retain qualified and proficient warehouse personnel –forklift operators in particular.

The automated reach trucks supplied by Toyota undertake every type of task that would be expected of traditional manually-operated models. Originally 26 Toyota RAE160 automated reach trucks were acquired for operation at The Park but such has been the success of the system and, with throughput rising at the site, a further three machines have been ordered. The trucks are part of Toyota’s Autopilot series of operator-free materials handling equipment that also includes counterbalanced trucks, powered pallet trucks and heavy-duty tow tractors.

Safety is a feature of all Autopilot products and, with built-in scanners and obstacle detection units preventing collisions, the machines can operate in the same area as manual workers and other materials handling equipment.

The trucks at The Park are controlled by Toyota’s in-house-designed Order Manager software. Capable of working as a standalone or communications layer with most WMS and production systems, Order Manager tracks goods storage, orders, traffic and flow.

In addition to the obvious saving in labour costs that opting for a fleet of automated reach trucks has delivered, other benefits include: reduced damage to goods, racking and trucks; greater picking accuracy; and more efficient use of the available storage space.

Given the scale and complexity of the project, integrating the Toyota AGVs and Radioshuttle units to The Park’s existing WMS and conveyor systems was challenging, as John Hobbs, Toyota project manager – logistics solutions, explains: “A lot of integration was required to automate what had originally been done manually. Several different systems had to be brought together and made to read and understand the messages that were being sent. In other words, we had to be sure that messages were going back and forth correctly between the client’s WMS and the system that controls the new hardware.”

The project went live in June 2021 and it is estimated that when the financial benefits accruing from the site’s improved throughput efficiency are added to the reduced cost of the wage bill that the automated handling technology delivers, The Park’s total annual cost saving will be extremely significant.

Richard Lloyd comments: “With automation costs decreasing and becoming more available with better paybacks, we were very aware of the importance of embracing the technology but, at the same time, we were also conscious of the need to invest wisely to ensure that our automated handling systems deliver maximum impact. We have to remain cost competitive and keep driving productivity forward, but won’t invest in automation that will become obsolete in three years’ time because demand has changed.”

Toyota’s John Hobbs adds: “The growing pressure to make the most of every square foot of storage capacity along with the fact that experienced workers are becoming increasingly difficult and costly to employ, means warehouse automation is now a highly attractive intralogistics option for companies across the beverage sector.

“As The Park demonstrates so clearly, automating those aspects of a wine warehouse’s operation that follow a predictable pattern makes a lot of sense – particularly since relatively recent developments in automation technology have seen the emergence of flexible and scalable products that deliver a rapid return-on-investment by driving productivity, saving costs and improving on-site safety.”