The Chinese manufacturer specialises in lithium powered forklifts with integrated batteries and has further broadened its range, including the heavy-duty BYD ECB70/80 counterbalance truck. 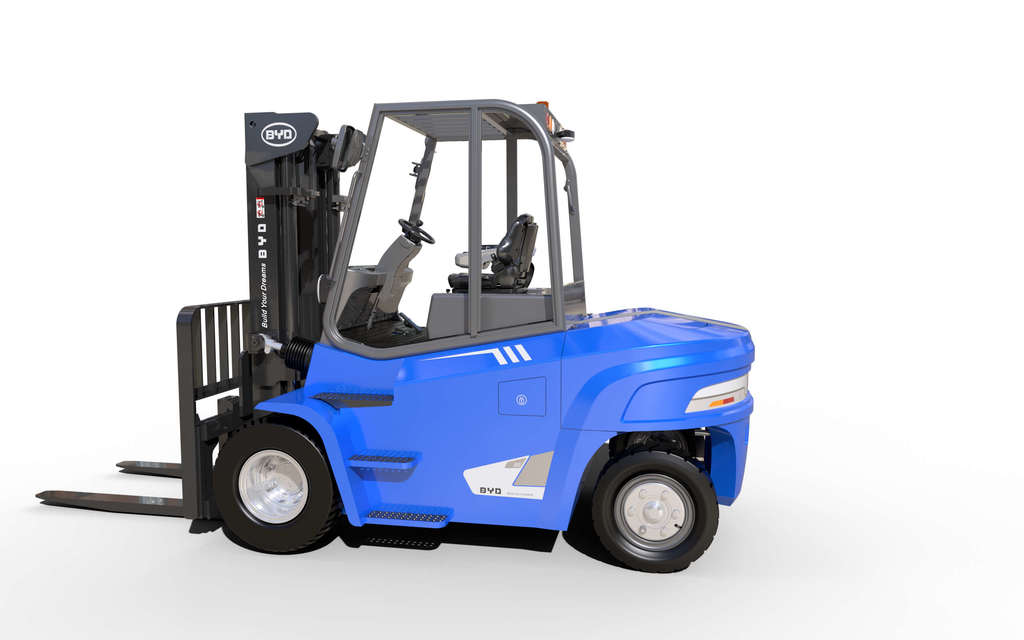 BYD USED the recent LogiMAT exhibition to introduce new products to its range of lithium battery powered forklifts. Since the previous show of LogiMAT in 2019, BYD Forklift has significantly expanded its range of forklifts.

The new heavy-duty BYD ECB 70/80 is BYD’s highest-capacity counterbalance forklift to date, and is suitable for use both inside the warehouse and outside in the yard.

Said to offer a breakthrough in a sector dominated by diesel- and lead acid-powered trucks, the BYD ECB70/80 can operate for up to nine hours on one charge. Wth one hour of charging, its range can be extended a further two to three hours, making it an attractive proposition for high-intensity operations in sectors such as manufacturing, beverage and building products.

“We were particularly excited to launch the heavy-duty BYD ECB70/80, a true ‘diesel killer’ that brings a zero-emission solution with no compromise on performance.”

LogiMAT visitors were also among the first in Europe to see the BYD ECB20S, a three-wheel counterbalance with a 2-tonne capacity. The all-purpose BYD ECB20S has attracted considerable attention from busy logistics operations thanks partly to its flexible zero-maintenance battery options that offer the high levels of availability.

Also making their European debuts are a pair of powered pallet trucks from BYD each offering lifting capacities up to 2 tonnes. The BYD PTP20P features a fixed ride-on platform and side panels, and has been optimised in virtually every area to improve operator safety and ergonomics, as well as manoeuvrability and energy efficiency. The new BYD PTW20Si, designed for use in retail, supermarket and stores for easier picking and transportation tasks, boasts a compact design, light weight and the ability to lift up to 750mm.

As well as introducing models into existing ranges that offer greater choice of capacities, BYD has launched the SEF range of counterbalance trucks, which have been designed to bring a cost-effective forklift to low-level users who may previously have believed the advantages of a lithium solution were beyond their reach.

BYD has made significant advancements in charging technology, including a new smart charger with flexible charging configurations that optimise energy use for any material handling application. Uniquely, BYD manufactures its efficient next-generation chargers and batteries in-house, making it the only manufacturer with the ability to ensure its forklifts are fitted with a tailored battery solution.

“Since we were last at LogiMAT in 2019, we have driven advancement in areas such as active safety, telematic solutions and charging technology at a rapid pace,” says BYD Europe forklift business unit director Blade Feng.

“We were particularly excited to launch to the European market our new models, including the heavy-duty BYD ECB70/80, a true ‘diesel killer’ that finally brings a zero-emission solution with no compromise on performance to a sector that has relied for too long on polluting IC engines.”

BYD Iron-Phosphate Batteries come with an 8-year (or 10,000-hour) warranty, offering its customers a safe, reliable, and long-term materials handling equipment partner supported by a growing network of local dealers.