Hubtex highlights how it is helping Boeing to build planes faster. HSS editor Simon Duddy also hears how the specialist manufacturer anticipates automated models will claim half of the electric sideloader market in ten years. 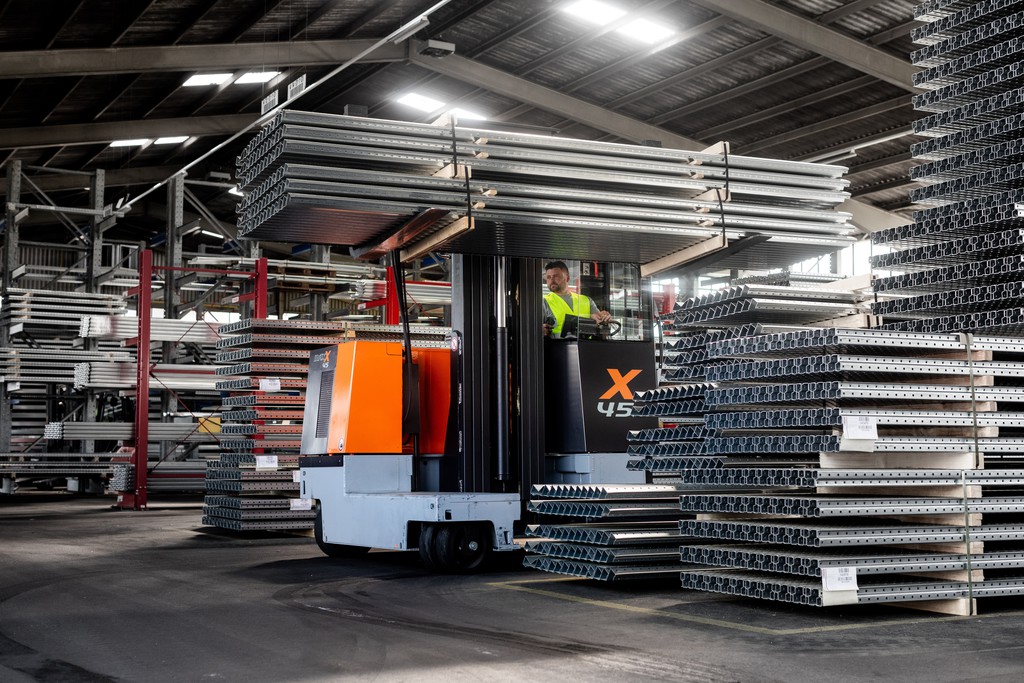 Hubtex has a strong aerospace focus and makes bespoke lifting equipment to help Boeing fit out interiors to its aircraft as they move along the production line, as well as bespoke AGVs that can lift 70 tonne fuselage parts.

In last year’s Modern Manufacturing supplement, we highlighted how Boeing had changed its supply chain strategy in the face of anticipated stiff competition from China. It has been pushing hard at suppliers to help it lower costs and build planes faster.

Hubtex thinks of its sideloaders as sophisticated plant, rather than forklifts. The manufacturer is highly vertically integrated, building its own masts on-site, for example. All components are integrated internally, and thoroughly tested.

The company builds around 750 trucks per annum, with 50% of those ‘specials’, and the other half being multidirectional sideloaders. It turns over 70m euros, employs 50 people in the engineering and design team and is experiencing 15-20% growth.

Industry 4.0 is a big focus for the future, for Hubtex and many other manufacturers, with increasing automation firmly on the horizon.

Hubtex MD Hans-Joachim Finger explains: “We predict connected and autonomous models will take half of the market for multi-directional sideloaders for long loads, over the next ten years.

“We have been building automated products for 15 years and we are sure this part of the market will expand.”

The German manufacturer expects sectors such as automotive and aerospace to move first, with timber and steel to follow quickly afterwards.

Hubtex sees logistics as the next frontier for automation.

“Fifteen years ago, automation was brought to the production process, bringing great savings. Now automaton will be extended to the supply chain and intralogistics,” adds Hans-Joachim.

“We are working on a platform to support clients using manual products to move profitably and easily into semi- and fully automated solutions.”

Hans-Joachim cautions that it won’t be appropriate for every client, for example, if production processes are still manual, it won’t make much sense to automate the material handling.

Hubtex manufactures some diesel powered trucks (around 5% of the total) but sees electric as ‘the future’.

As for lithium-ion powered batteries, this constitutes a small but growing proportion of its electric trucks (some 10%).