Busy packhouse works forklifts up to 14-hours a day

Potato packhouse Braegate has updated its machinery and improved logistics. 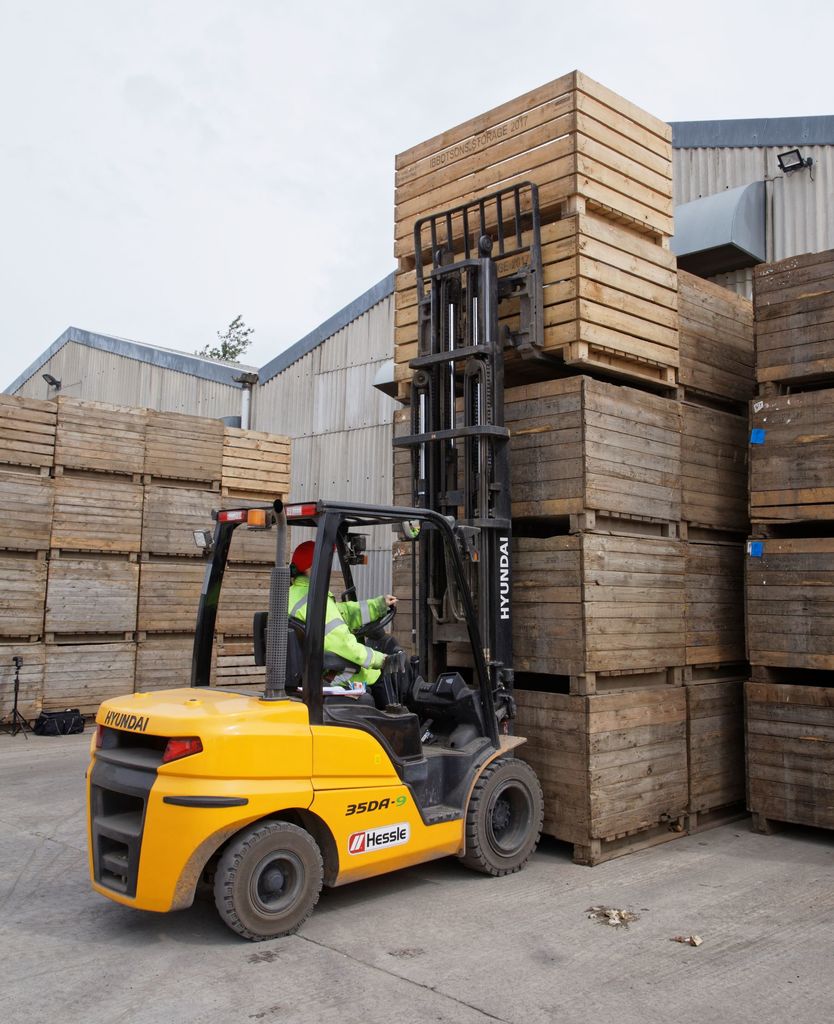 Instrumental in supporting its growth is Hyundai distributor Hessle Fork Trucks, who have supplied 13 Hyundai forklifts to the spud giants. The most recent deal was for six new 3.5 tonne 35DA-9 diesel forktrucks.

Brian Whitaker is the company’s deputy transport manager and is in charge of the company’s fleet of vehicles, including the firm’s 13 forklifts.

“We are not potato growers - we are a ‘packhouse’ where we bring the raw produce in and process the potatoes for our customers’ demands.”

The machines are relatively new and are no more than three-years old. The oldest of the machines, the 30D, is being replaced with brand new three-tonner which is on its way. 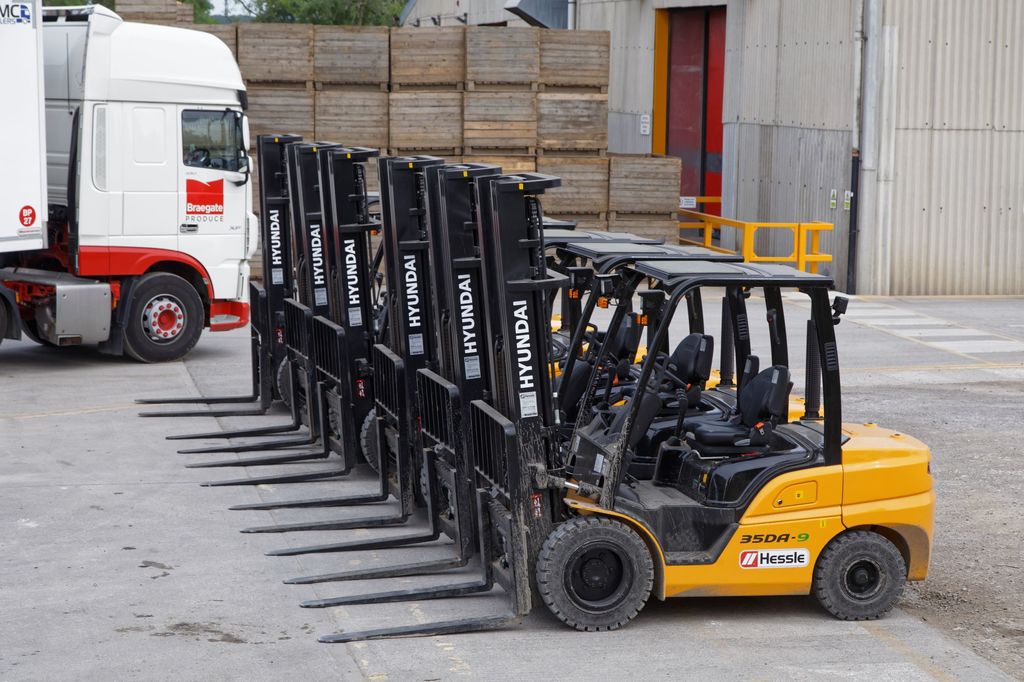 Brian explains: “We are totally committed to Hyundai because we believe it to be an excellent product. We used to run a competitor’s brand of machines which were useless for the job and constantly breaking down. The engines were always seizing up - we took the decision to replace them all and brought the Hyundais in. The six new machines have replaced all of the other machines we had.

“It was three years ago we took delivery of our first Hyundai. Since this time the company has evolved, and the orders are increasing, as has our customer base – therefore our workload has significantly increased. This is the reason we have gone from six to eight trucks three years ago and now we have 13 in our fleet.

Braegate needs a truck that is reliable and can withstand a tough workload. The three-tonne truck has 8,000 hours on the clock – the forklifts are constantly in use – they don’t really get any downtime. Braegate has a day and night shift so most of the forklifts in the packhouse and dispatch are working up to 14-hours in a day.

“With our previous trucks we were constantly having to swap trucks around as one would break down,” says Brian. “We also like to keep it that one operator on each shift drives the same truck – a bit like in the construction equipment sector, where the operator is responsible for his/her own mount. It works well as each of the operators knows his/her own truck and is familiar with how it runs as even though the models are the same – each truck is different. This in turn has resulted with the operator having some affinity with his/her machine and looks after it.”

Hessle director, Gary Hawkhead, approached Braegate three-years ago and introduced the firm to the Hyundai brand. Braegate had a 30D truck on demo and they were impressed and invested in its first Hyundai.

A visit from Gary at Hessle to the Braegate site determined which Hyundai forklifts were right for the job.

Brian says: “The good thing about Gary is he comes out on site to assess our needs. I took him round the business and showed him what duties each of the trucks performs – he then provided us with the solution knowing exactly what specification of truck we need for each specific job.”

The company stacks its potato boxes six high and each box contains 1-tonne of Potatoes. In order to get them six-high the forklifts will lift them two at a time. 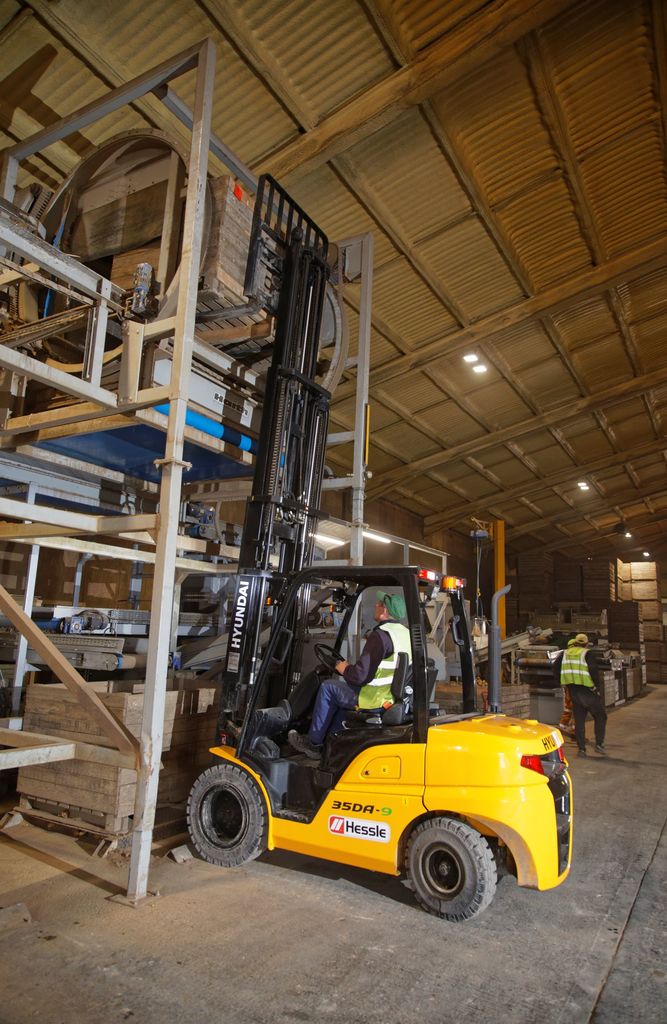 “An operator will have two tonnes on the fork and the lift is up to 20-foot-high – the impressive mast reach on these forktrucks is perfect for this task,” explains Brian.

Brian adds: “The operators absolutely love the Hyundai machines and they are 100% more efficient and reliable than the previous trucks we owned. You can tell how impressed they are with the machines by the way they look after them – so much so that one of the operators was using polish on his machine the other day.”

The new 30D-9A have been specified with the Blue Safety Lights, which casts a bright blue light onto the ground in front of or behind the forklift while it is in operation, which warns pedestrians of an oncoming forklift.

“The back-up service from Hessle is excellent – second to none in fact. Spare parts are usually in stock and anything that’s Hyundai is very good. Our forktrucks and pallet trucks are combined with Hessle – it’s so much easier and we like to support a local firm. Communication is key and it’s the one thing that keeps this business going. Hessle work on the same principle,” concludes Whitaker.

Braegate Produce, based in Tadcaster in North Yorkshire, is the new incarnation of Ibbotsons Produce, following a management buyout of the company in December 2018. The company is headed up by Tony Edwards, who is now chief executive of Braegate.

Employing in the region of 100 people, the firm supplies quality potatoes to supermarkets, wholesalers and processors all around the UK. The company pride themselves on delivering the best Potatoes from the heart of Yorkshire to a nation of potato lovers!