Ocado has its eye on a massive online grocery opportunity and is increasing investment. The company is still not profitable, however. 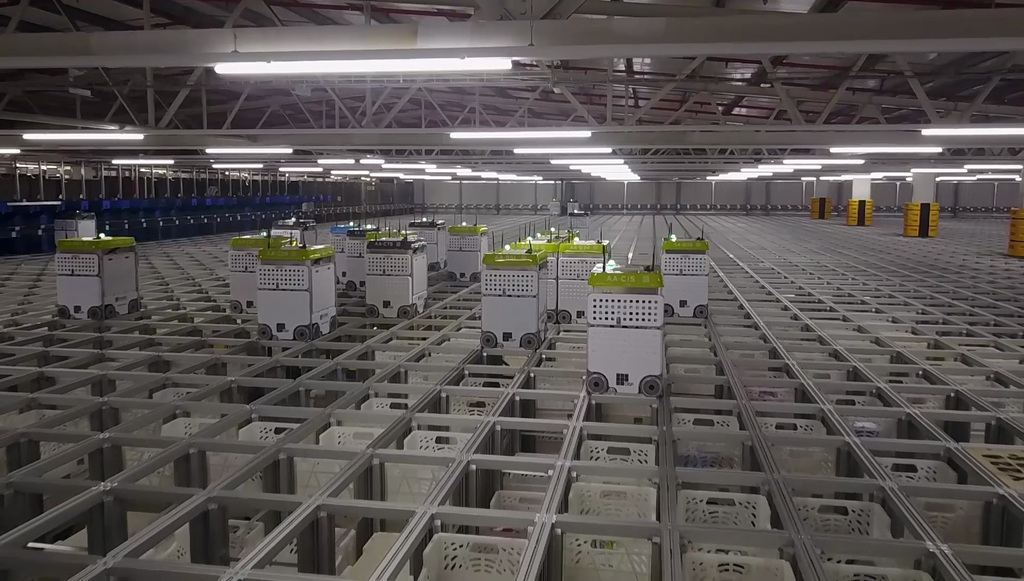 Part of the investment is Ocado’s third generation robot, which is in production. The company has three robotic pick arms live in Erith CFC, in South East London, and it has more than doubled the pick efficiency of this technology since the beginning of the year.

The firm opened its first Ocado Zoom site, in West London, a year ahead of plan.

The Ocado Smart Platform will also be used by North American partner Kroger to build its first mini CFC in Great Lakes.

Ocado invested £80.6 million in its UK operations. £77.5 million relates to its UK CFCs. This included £14.1 million relating to the development work for Erith as it is currently scaling up operations with an expected eventual capacity of over 200,000 orders per week; and investment of over £47 million in new capacity across Andover, Bristol and Purfleet sites.

The firm saw retail revenue growth of 27% in the first half of the year, plus 58% growth in its international solutions business. It opened its first partner fulfilment centres in Paris and Toronto.

Despite the bumper business, the company still lost some £40 million in the first half of the year, largely due to investment costs.

That said, Ocado has raised a lot of capital and is cash-rich, with a cash position said to be around £2.3bn.

Tim Steiner, CEO of Ocado Group, said: “As a result of Covid-19 we have seen years of growth in the online grocery market condensed into a matter of months; and we won’t be going back. We are confident that accelerated growth in the online channel will continue, leading to a permanent redrawing of the landscape of the grocery industry worldwide. This will mean more demand for Ocado Smart Platform from current and prospective partners.”

COVID-19 has accelerated the ongoing channel shift to online grocery.

In the UK online penetration has nearly doubled within a few months.

In its results Ocado went on to explain: “We believe this channel shift is sustainable, as survey data shows that many consumers who were shopping online during the peak of the pandemic in their respective countries have either continued to do so (56% of those in China), or intend to continue online shopping as ‘lockdown’ measures ease. In the UK, 30% of consumers say they will order more of their groceries this way after the pandemic, whilst 90% of online shoppers in the USA expect to continue grocery shopping this way.”

The combined revenue of its nine global partners is £210 billion, while sales in addressable key markets are £2.8 trillion. In the context of accelerated channel shift, Ocado believes this represents a fee opportunity of £3.5-£26.3 billion, depending on the level of online penetration ultimately achieved.

Some commentators have seen a missed opportunity, however.

Chris Moss, a senior manager at management and technology consultancy, BearingPoint, said: “Covid-19 has been an accelerator for online grocery shopping and Ocado have certainly got their fair share. With more international operations due to come on stream later this year they are continuing to pivot from a UK grocer to a Global Logistics Solution Provider. There is no doubt this sector will continue to expand and Ocado are incredibly well placed to deliver ongoing socially distant and cost effective deliveries.

“In the UK they will be kicking themselves about missed opportunities; why was their website unable to cope with peak Covid demand, why did they have to restrict key products for customers and how can they avoid their order capacity being inflexible in future peaks. The automated solution is fantastic in a steady state but they will need to think about how they can efficiently cope with unexpected peaks in the future.”

Ocado suffered the destruction of its Andover fulfilment centre in a fire in February 2019 so its capacity was constrained.

Chris said Andover continues to reduce capacity but it is due to be back on stream soon. Ocado believes it could have fulfilled up to 10 times the demand it did with unlimited capacity so the underlying challenges remain the same, he added.

A few months ago, we wrote about Ocado’s ongoing struggle to turn a profit, despite its growth, and how its international projects presented an unusual risk.

So far, the tech company has coped well with the challenge saying ‘our first two international CFCs for Groupe Casino, in France, and Sobeys, in Canada, were launched ahead of plan, despite Covid-19 related disruption’.

To help with this project delivery, Ocado has added 300 technology employees in the first half of the year. Technology and Engineering headcount is now over 2,700.

Also, to help it bring increased scale and reach to its supply chain, it has partnered with global contract manufacturing companies, in addition to continued work with longstanding partners.