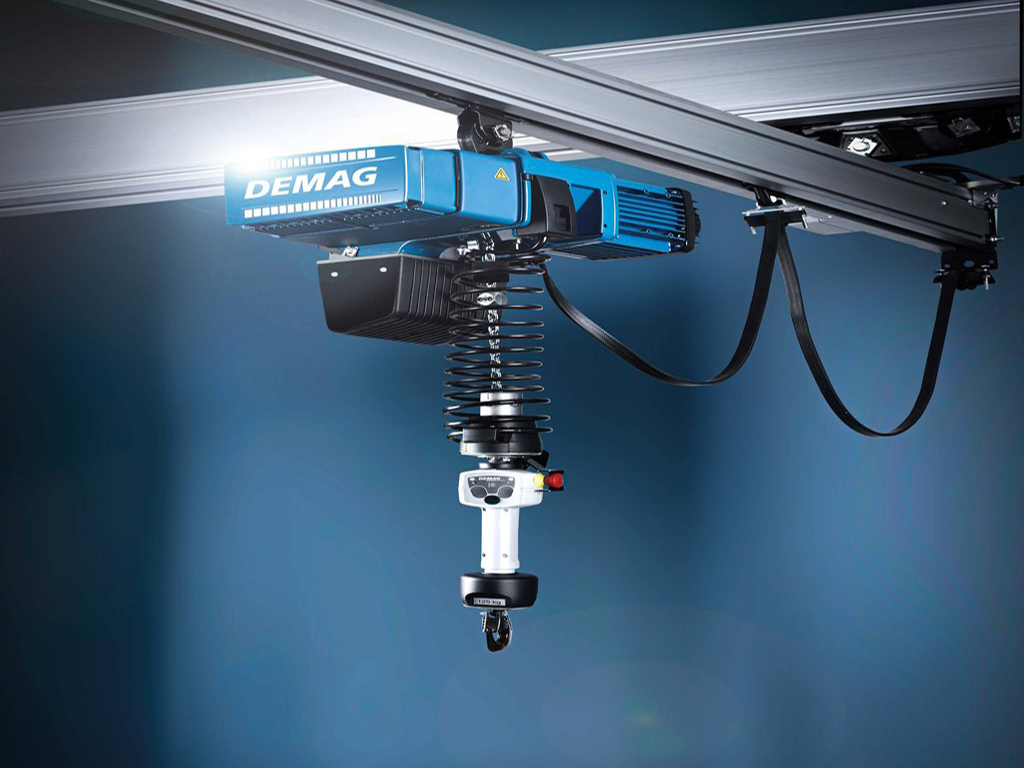 The DCBS models feature a compact design and a smart control system, making material handling and assembly processes simpler and safer. The DCBS is a variable-speed chain hoist based on the company’s proven DCS range and incorporates the Demag D-Grip Servo control handle. Models are available with SWLs of 125 or 160kg.

The DCBS chain hoist benefits from an integrated balancer function, which has been adopted from the Demag D-BE electric balancer. It enables loads to be guided without the need to actuate the controller. The operator simply moves the load to the desired height with minimum effort and can position it much more precisely, using both hands.

Depending upon choice of operator selected or automatic control mode, the DCBS unit switches between ‘grip control’ and ‘load control’ operating modes, with high-performance sensors facilitating intuitive load control. Manual force exerted by the operator is detected in the grip control system by a pressure sensor and is used to control the lifting motion. This eliminates the need for the operator to press any buttons to control the hoist.

An integrated load sensor detects the weight of a load and possible weight fluctuations to determine the desired direction of movement and speed from these values in load control mode. This allows the operator to move the load to the desired position using both hands. In assembly mode, which is particularly suitable for joining components horizontally, any possible uncontrolled load movements are avoided, simplifying precision assembly processes. It also avoids potential damage due to collisions between components and, as a result, improves productivity.

The DCBS hoists also incorporate a load pick-up mode, which is useful for functions such as changing tools or removing parts from jigs or test benches. The balancer may be adjusted so that it only lifts until a predetermined force is reached. This enables load handling attachments to be lifted and pre-tensioned, allowing loads to be removed from a jig, without dropping or being suddenly pulled upwards. At the same time, the machine or jig is protected against excessive forces.

The DCBS offers design features that simplify its operation, improve safety and reduce service requirements. These include its slipping clutch with automatic cut-out based on speed monitoring, which prevents permanent slipping in the event of overload. Because the brake is arranged in front of the slipping clutch in the load-bearing arrangement, any dropping of the load is prevented by applying the brake automatically, in the event of a malfunction. All operating modes are linked to additional protection functions, including adjustable load or speed limits for improved workplace safety. The gearbox, slipping clutch and brake are maintenance-free for up to 10 years. The DCBS safety-related functions satisfy Performance Level C and Category 2 to EN ISO 13849-1 as a minimum requirement.