UK husband and wife team, Alan and Pat Braithwaite have fulfilled the road trip of a lifetime after driving a Morgan 3-Wheeler 3,500 miles (5,600km) around India in support of Indian-based, not-for-profit Goonj. 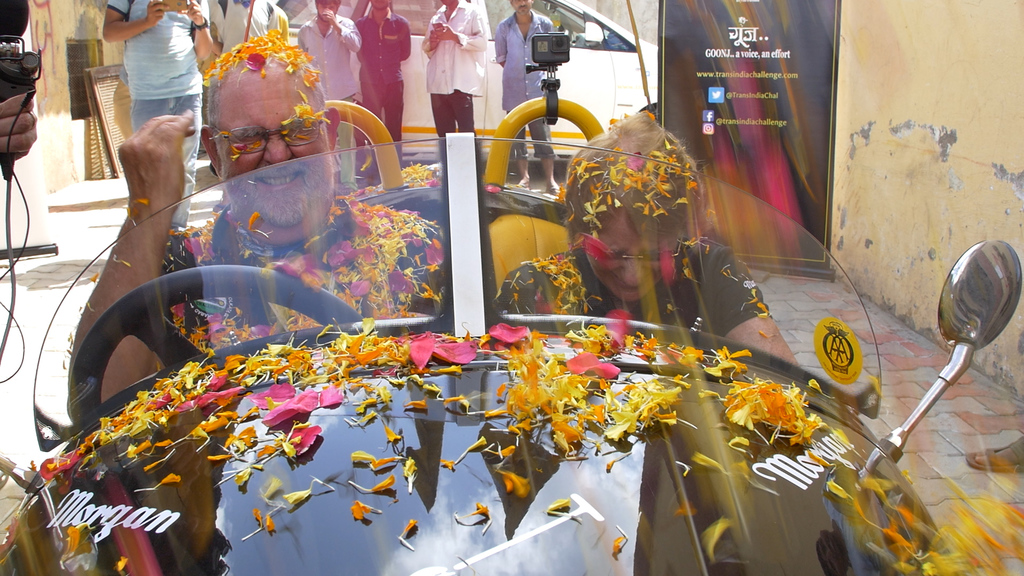 Having departed from Mumbai on 1st of February, escorted by members of the Royal Hearted Royal Enfield Motorcycle Club, the 73-year old couple arrived back at the Goonj Distribution Centre, completing the loop which took in cities including Hyderabad, Visakhapatnam, Kolkata, Patna, Agra, New Delhi, Jaipur and Udaipur.  Goonj Staff and volunteers were joined the organisation’s Co-Founder Anshu Gupta.

An emotional Alan Braithwaite said: “We achieved the Challenge and it’s fantastic, but actually the real work starts now to build on our relationship with Goonj. It’s been an amazing experience. We saw the real India, we’ve given so many smiles and it’s made a real difference to Goonj which was something I had hoped to achieve but wasn’t sure I could expect. For me, completing the Challenge was never in doubt, but it was certainly more difficult than I had ever anticipated.”

Alan’s wife, Pat Braithwaite, who was passenger and sometimes driver on the trip, added: “ It’s an extraordinary feeling and I’m thrilled we have achieved it. I want to go on!  I didn’t realise how difficult the roads would be, but the team has done an amazing job in keeping us safe.”

Despite two significant mechanical issues at the end of Legs One and Three, the Team arrived just one day behind schedule, thanks to support from expert technicians in both the UK (Morgan Motor Company and Krazy Horse) and India (Harley Davidson Bangalore, Celica Jeep, the WIAA, TLC Assist and Autonation Plus Service).  Some major potholes and poor fuel quality in some areas were just a few of the tests set for Queen Bee.

According to Alan: “The Morgan 3-Wheeler is not the most appropriate vehicle for some of India’s roads, but we knew that before we set off.  It was part of the challenge”, he joked.  “Queen Bee is an extraordinary car and attracted overwhelming attention wherever we went.  We only made a few minor modifications before shipping her to India. In particular raising the suspension which proved critical.”

The Challenge also received backing from World Wise Foods, Bearing Point, E-Cargo Bikes and the UK’s GREAT brand. Along with individual contributions, the amount pledged has now reached around £100,000 (almost 1 crore rupees) and the team is confident of reaching the final target through post-event activity, including a feature-length documentary set for release later this year. Those wishing to support the Challenge can visit www.transindiachallenge.com or the GiveAsia website.

Commenting on the impact of the Challenge, Anshu Gupta said: “This is a great example of the determination of individuals.  At Alan and Pat’s age it is not easy dream up something like this and they have worked relentlessly to make it happen. For Goonj, they are possibly the best people to be advocates for Goonj because they have seen our work on the ground and really understand what we do and why.”

Meenakshi Gupta added: “I have run out of adjectives to describe the Challenge and what is has achieved. I do not know how Alan came to work with us but there is definitely a connection on both a human and spiritual level. They have shown that nothing, including age, can be a barrier and it strengthens my faith in humanity”

The team, which also included documentary Director David Campbell from Republica Media and Peter Brill from communications specialists Net.Mentor Ltd, return to the UK on 11th March after taking time to celebrate the Holi festival.