Demand for UK logistics space continues to be resilient with the first quarter of 2018 being the strongest for the past three years, according to research from Cushman & Wakefield. 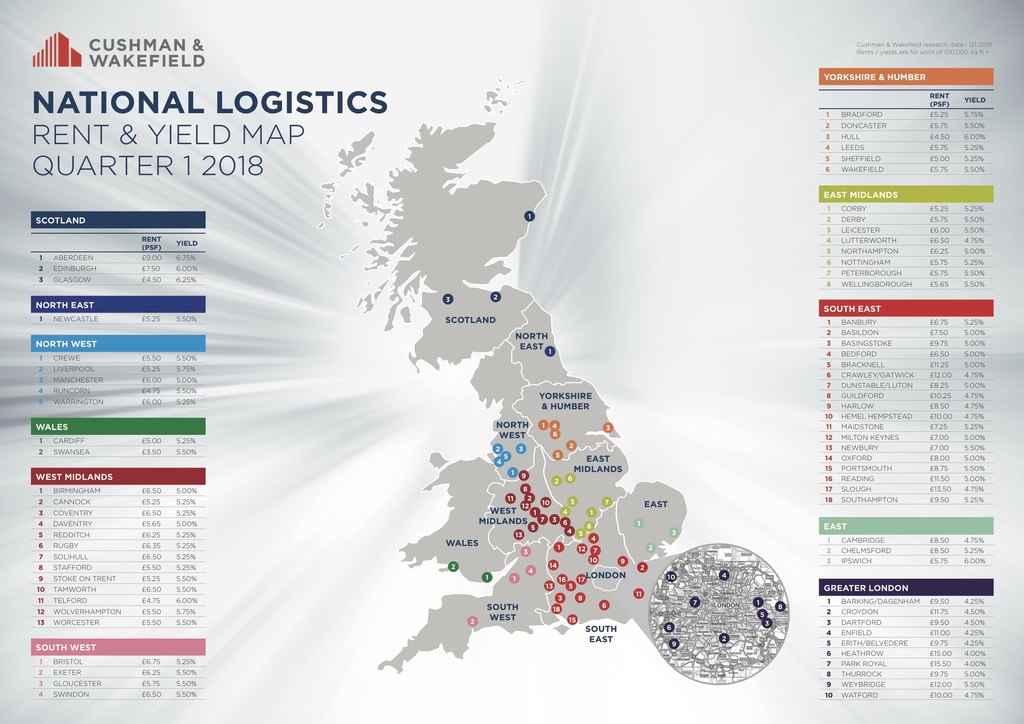 Total take-up of logistics space in the first three months of 2018 climbed to 10.2million sq ft, outpacing the same quarter last year by 60%. The purpose-built share of the market was especially strong indicating that many occupiers are looking beyond Brexit and taking longer-term commitments.

In the first quarter, purpose-built deals accounted for 35% of the total number of transactions and 67% of total take-up (by sq ft). Retailers (including eRetailers) took the lead over manufacturers during the first quarter, accounting for 57% of take-up.

UK omni-retailers have been busy ensuring their portfolios support the changing nature of their businesses as online sales account for an increasing share of total turnover. M&S’s decision to close its Neasden site in North-West London to open a new 495,000 sq ft distribution centre north of the M25 is an example of this type of restructuring. Meanwhile, H&M plans to consolidate eFulfilment activities in a new 750,000 square feet purpose-built facility in Milton Keyes later this year.

The research also shows that take-up by pure online players is on the rise, accounting for 24% of total retailer take-up in the first quarter. After a pause in its network expansion at the end of last year, Amazon resumed its growth plans to sign a 500,000 square foot purpose built deal at East Midlands Gateway Park.

Bruno Berretta, UK Logistics & Industrial Research & Insight, Cushman & Wakefield, said: “High levels of demand during the first quarter of this year point to continued robust performance for the remainder of 2018 for the UK logistics sector. While Brexit and pricing concerns are intensifying, strong market fundamentals support an optimistic outlook.”

From an investor perspective, diminishing levels of developable land, particularly in key logistics locations like the West Midlands and near the M25, along with new entrants to the UK market, means that bidding on the limited amount of available land is increasingly competitive. In fact, Panattoni was the latest developer to enter the highly competitive UK market, recently announcing a speculative development programme that plans to target up to 3 million square feet of new product annually.

Prime rents grew at record levels during 2017, according to the report. Nearly a third of the 73 submarkets covered by Cushman & Wakefield, registered double-digit increases in prime rents during the calendar year. Virtually flat prime rental growth during the first quarter suggests that last year’s rental growth performance is unlikely to be replicated during 2018.

Longer-term, supply constraints combined with a diverse occupier base that includes a growing number of online retailers, point to the strongest rental growth prospects in the South-East, particularly for urban depots.
MORE FROM THIS COMPANY