IPAF’s first ever Elevation conference, networking and gala dinner event in the UK took place on 25 September with over 200 attendees across the one-day event of meetings, workshops, seminar and gala dinner at the DoubleTree by Hilton Hotel, Coventry, UK. 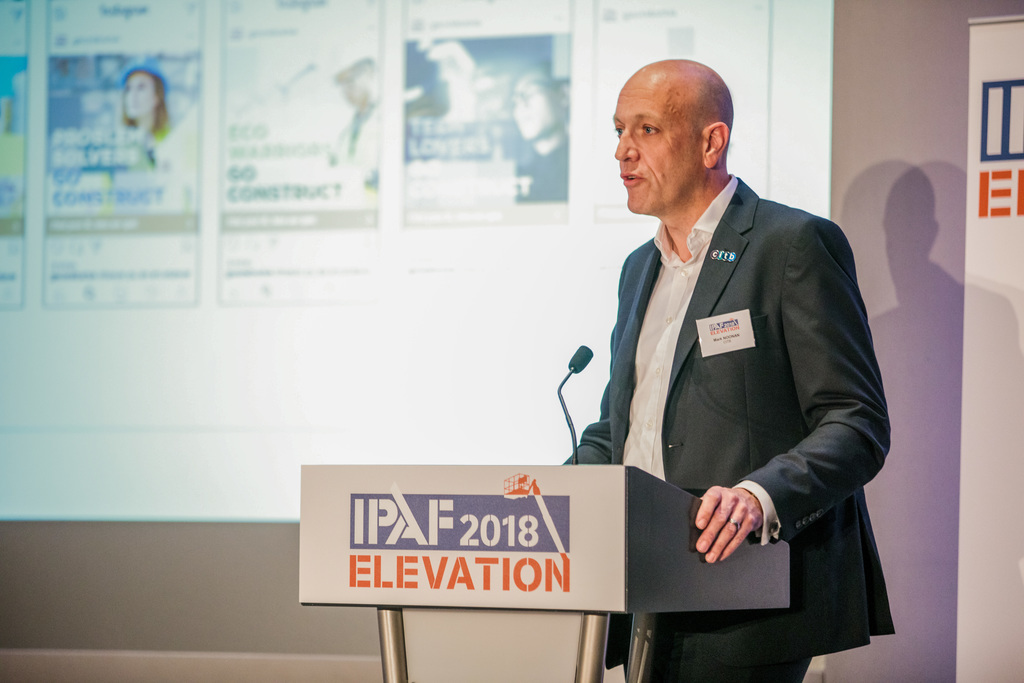 Mark Noonan, Industry Relations Director from the CITB (pictured), talked about the major changes the organisation is undergoing, with a complete reorganisation afoot, and how the body is no longer issuing but still administering the CSCS skills card system, with the logo soon to be available on UK-issued IPAF PAL Cards.

Jo Fautley, Deputy CEO of Build UK, touched on the reputational challenges facing major UK construction firms post Grenfell and the collapse of Carillion, as well as covering changing legislation on retentions, and how Brexit is placing a “block” on law-makers in the UK Parliament as they are just too busy with the issue of leaving the EU. She also covered the body’s new 200-question quality audit scheme, and how that will dovetail with other bodies’ quality audit systems, including IPAF Rental+.

Jan-Willem van Weir, AWP Product Manager at JLG, painted a picture of what the work site of the future might look like, what technological advances are coming down the line, and expressed his hope that with lithium battery technology rental companies and operators should be able to get a “full day’s work from a fully electric MEWP within the next two or three years”, urging powered access innovators to “learn from our industry… and others”.

And Ray Cooke, from the UK HSE’s Construction Sector Safety Unit, was a hit as always giving an overview of some of the latest Darwin Award-worthy approaches to temporary work at height. On a more series note he stressed that the HSE was engaged in “challenging the presence and improper use of ladders” on worksites, but warned that the organisation’s inspectors simply “can’t be everywhere at once”. He also questioned why, when health & safety failures cost British business around £15bn per year, it “still isn’t sexy”.

Malcolm Bowers, Director of Lifterz, gave a wry look back over almost a quarter century in powered access in an entertaining overview (prompting a later question as to who would be better placed to write the definitive history of the powered access industry?)

Nigel Taylor, European Director of Serious Labs, joined Giles Councell, IPAF’s Director of Operations, and Ángel Ibáñez, IPAF’s Global Representative for MCWP & Related Products, on the rostrum, to talk about significant developments in technology including virtual reality (VR), augmented reality (AR) and extended reality (XR) and what impacts they were likely to have on IPAF’s new generation training programmes, which now include a new hoist operator course that was covered in detail. IPAF closed its own consultation into VR technology at the end of September, and a white paper on the possibilities of XR is expected soon.

Ahead of the seminar there was an engaging open meeting for IPAF members, and the speakers’ programme was capped off with a lively question & answer session that threatened to run seriously over time, as so many hands went up.

In the evening there was a gala dinner and after-dinner entertainment from Rob Deering, who tailored his humorous musical routine to the powered access audience superbly. Andrew Muxslow of AFI Uplift was crowned IPAF’s Smooth Operator 2018 after completing the MEWP VR simulator challenge with the least faults closest to the ideal time, and Mark Woolliscroft of Prolift Access was runner-up. Meanwhile Nationwide Platforms won the IPAF training video award, with JMS second and HSS picking up a “highly commended” trophy.

Richard Whiting, IPAF’s UK Market General Manager, who organised the event, comments: “It proved a very useful new event format, as in the morning IPAF hosted meetings of the Access Link group, the IPAF UK Country Council and the UK MCWP work group. There was also a workshop to help IPAF rental members in the UK making the mandatory transition to IPAF Rental+ minimum standards.

“We know how valuable our members’ time is, so by combining the meetings, seminar and social events in the evening we hoped to minimise their time away from the job.”

Tim Whiteman, CEO & Managing Director of IPAF, adds: “Feedback was all very positive and the event was a resounding success, so we’re pleased to confirm it will return next year and should be considered a fixture in IPAF’s global events calendar.”

For more details about all upcoming IPAF events and appearances, including updates about the date and venue for Elevation 2019, please check www.ipaf.org/events