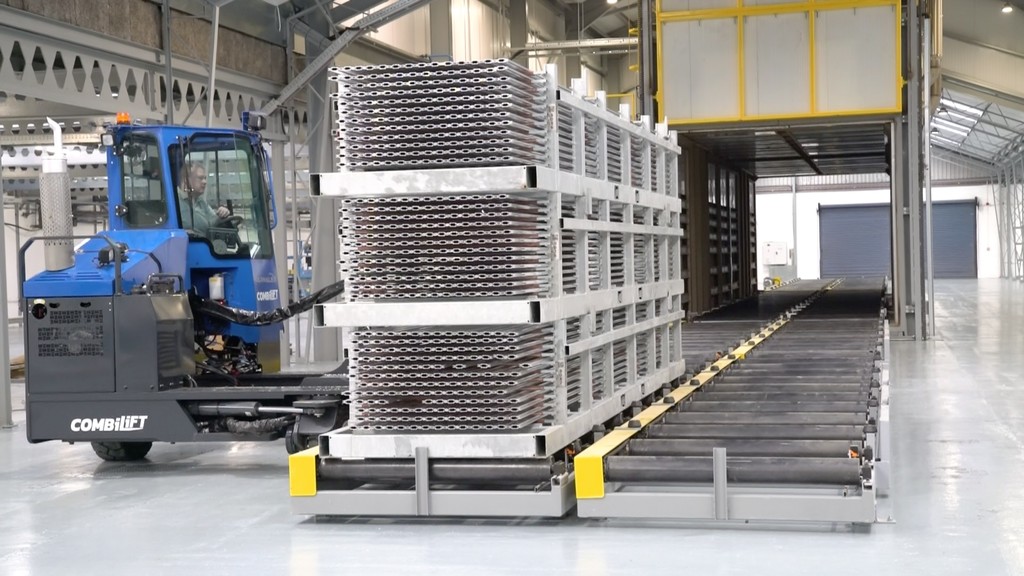 Garnalex has made substantial investments in its new extrusion factory in Nether Heage, Derbyshire to revolutionise the way aluminium windows and doors are fabricated, installed and sold. It has also invested in a fleet of Combilift multidirectional forklifts which play an integral role in ensuring maximum efficiency in this advanced facility.

CEO Roger Hartshorn was one of Combilift’s first customers around twenty years ago when he used the original C-Series trucks in a previous company he owned, and he had no hesitation in choosing Combilift once again, stating that “the trucks are now a standard in the industry, crucial to high levels of safety and operational flexibility.”

The scale of production in the 100,000 sq ft factory, which can extrude four tonnes of aluminium an hour, requires a coordinated approach, and as well as doing the heavy lifting, the Combilifts are fitted with weighing scales, bar code scanners, QR code readers and PCs. These feed information into the bespoke management and tracking system developed by Garnalex’ in-house software team, enabling the precise location of all products to be identified at any time.

Garnalex initially took delivery of two 4 tonne C4000 trucks and a Combi-CB with 2.5 tonne lift capacity, all with LPG power, 4-way capability and painted in special Garnalex livery colours. Two more C4000 models are on order, chosen for their ability to be used as universal trucks, outside as well as inside, for handling long lengths of raw materials and finished products in all areas.

They offload incoming logs, 7m long, four to a pack, which each weigh around 800Kg. The exact weight of each load is checked, a barcode is affixed to the logs before they are taken to storage and then to one of the two extrusion presses. The trucks bring 7m long baskets of extrusions - identified by QR codes - to the  ovens, and back to storage areas once the cooking process has been completed. The 5.5m triplex masts enable them to pass under low doorways, and lift goods to high storage bays when extended. They also handle and load the 3m long, 3 tonne boxes of scrap that are sent back to Wales for recycling.

The Combi-CB, the first truck of its kind to combine compact counterbalance design with multidirectional capability, can carry pallets as well as longer loads and is also used for handling plastic extrusions at LB Plastics, now part of the Garner Holdings group and co-located in Nether Heage. “This truck’s clever design and versatility is a great asset,” said Roger.

Roger continues: “Before we had Combilifts in the companies I used to own, we had tried all sorts of different pieces of equipment in a bid to improve handling and storage such as sideloaders, but once we discovered the C4000 we had the ideal solution. Martin McVicar and Robert Moffett came up with a good idea that that just keeps on getting better. The engineers at the factory in Ireland continue to enhance and customise products to individual requirements as they did for us by incorporating the technology we needed. It’s important that we know exactly where our products are at all times, and with our new forklifts and GarnerSys to integrate them into the operation of the factory we do.”