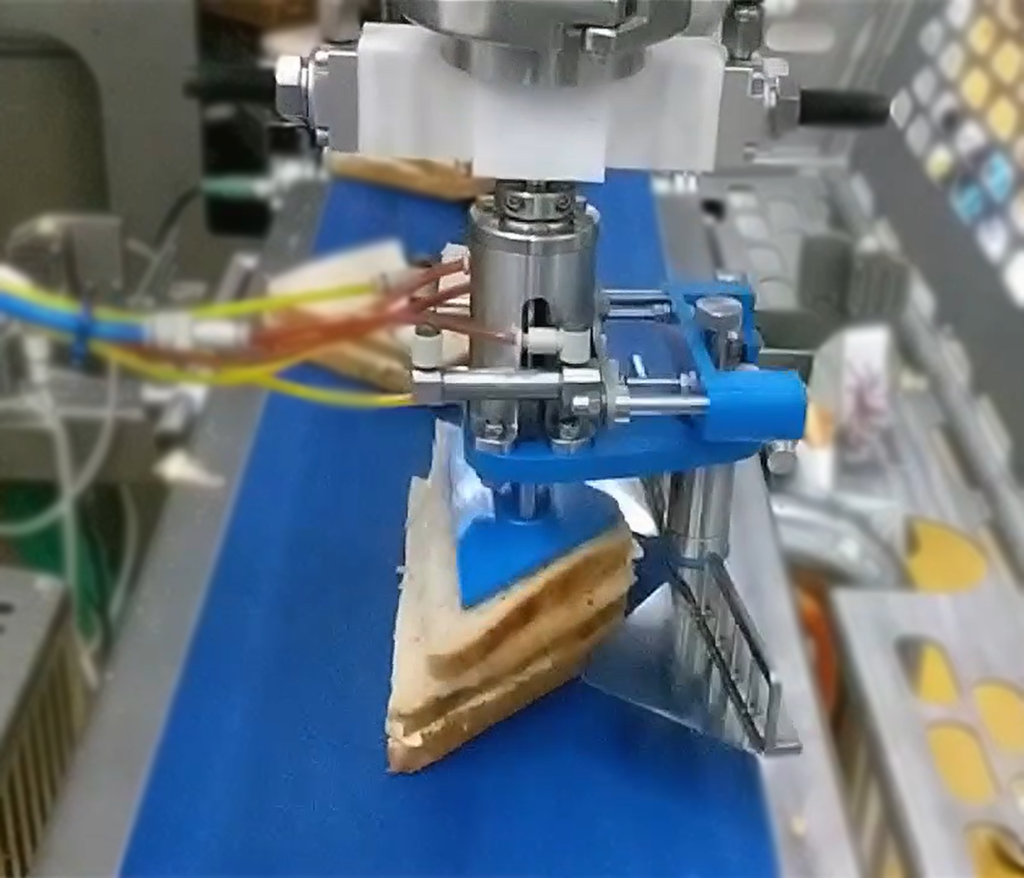 Although simple automation can give some manufacturers the boost needed to increase production and product consistency, more complex applications often require intelligent, flexible robotic solutions that can adapt to variable products and picking locations.

In the case of a large-scale sandwich producer, growing production demands coupled with a major labour shortage provided motivation for them to robotically automate a high-speed sandwich stacking application.

The robots’ task may seem simple: after the sandwiches are halved in the cutting machine, the robots need to pick up and rotate to stack one half on top of the other, making them easier for human workers to package manually further down the line. However, this application was tricky to automate for a number of reasons. The sandwich halves vary in their position as they come out of the cutting machine, so the robot would need some sort of vision intelligence to recognise and understand the location of each half on the conveyor. They also needed to be able to stack the sandwiches in practically the blink of an eye.

Because TechBrew needed to integrate its solution into the customer’s existing production line, it meant making creative use of limited space. To this end, the R series robots were inversely mounted on a cantilever beam attached to the cutting machine, and the F60 controllers’ compact size made it possible to save further space by stacking them on top of the sandwich cutting machine itself. To maximise throughput, the robots face outward, stacking sandwiches on two different conveyors which are running simultaneously. There are many variables in this application, so TechBrew used a laser range finding system coupled with conveyor tracking to detect the shape and location of the sandwich halves as they emerge from the cutting machine. Once the sandwich halves have been stacked, they travel down the conveyor to a place where human workers are waiting to place the product into triangular cardboard boxes.

TechBrew designed a custom gripper specifically for this application. The pneumatic end effector is controlled directly by the F60 Controller, allowing for quick movements. A controllable pressure plate comes down to hold the product in place as two stainless steel paddles slide under the sandwich half to lift it. Once lifted, the actuator spins the sandwich half through 180°, and force dampers at the end of the rotation keep the sandwich and its ingredients intact.

Like many other manufacturers, the customer struggled, sometimes daily, to keep up with production goals due to absent workers.

“The main driver for the end user here was the frequent shortage of labour. Their production lines were understaffed, and they were always missing people from their optimum shift capacity,” says TechBrew mechatronics designer Kyran Findlater. Obviously TechBrew had to consider national food safety regulations when designing this solution, and in this case the integrator used the cleanroom version of Kawasaki’s 5kg payload RS005L general purpose robot. As standard it offers a pressurised cavity, ISO Class 5 cleanroom specification, and comes with an aluminium arm cover, rubber outer seals and a chemical resistant epoxy paint finish for easy wash down. The patent-pending end effector’s tool-less design makes it easy to disassemble for cleaning purposes, and it is constructed with stainless steel and food-grade plastic.

The combination of Kawasaki’s AS programming language and its F60 controller easily handled the complexities of this project. Findlater was able to program this application directly on the robot, without a co-processor, which reduced costs and simplified the installation. The Kawasaki F60 Controller’s high processing speed handled real-time scanning and data analysis on the sandwich halves, and output the robot coordinates in under 200 milliseconds, while processing a queue of sandwiches at a rate of 60 per minute.

The entire sandwich stacking process takes just 800 milliseconds. Throughput has increased significantly as a result of the robot’s consistency.