This modern conveyor system is produced and marketed by Avancon SA, Switzerland and was developed by Dieter Specht, the co-founder of the Interroll Group. The sophisticated full system is first and foremost focused on safety. 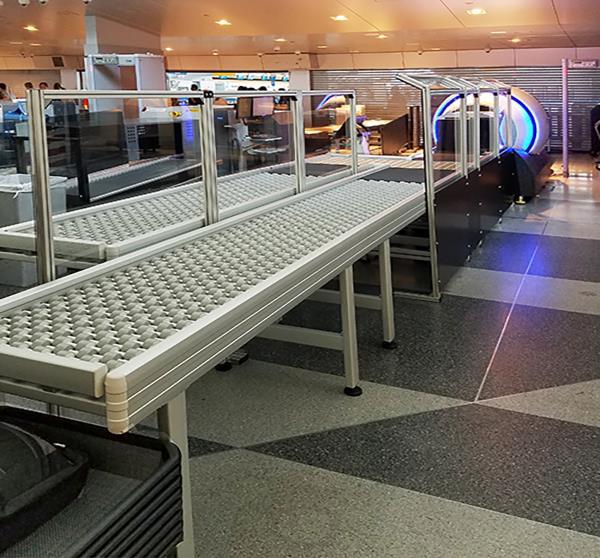 The American Administration for Occupation, Safety and Health (OSHA) reported 25 serious accidents involving roller and belt conveyors in 2017, of which 2 were fatal. Certainly, there are different safety regulations for safety in all countries. But even if a life roller conveyor driven by round belts or poly-V belts or other drives is provided with a safeguard so as not to interfere with your finger from the outside, there is no protection from below.

As reported here: A young woman with frizzy hair carries some small objects and passes along a driven roller conveyor. Suddenly, something falls down and rolls under the driven roller track. She bends down under the conveyor in order to pick it up from the rear part. Then, at that moment, her frizzy hair engages from below into the drive mechanism. Her head is pulled up and completely torn off with the scalp. She screams terribly. Colleagues rush up, immediately push the emergency stop and pull the injured woman from under the roller conveyor with blood all over. A horrible sight! 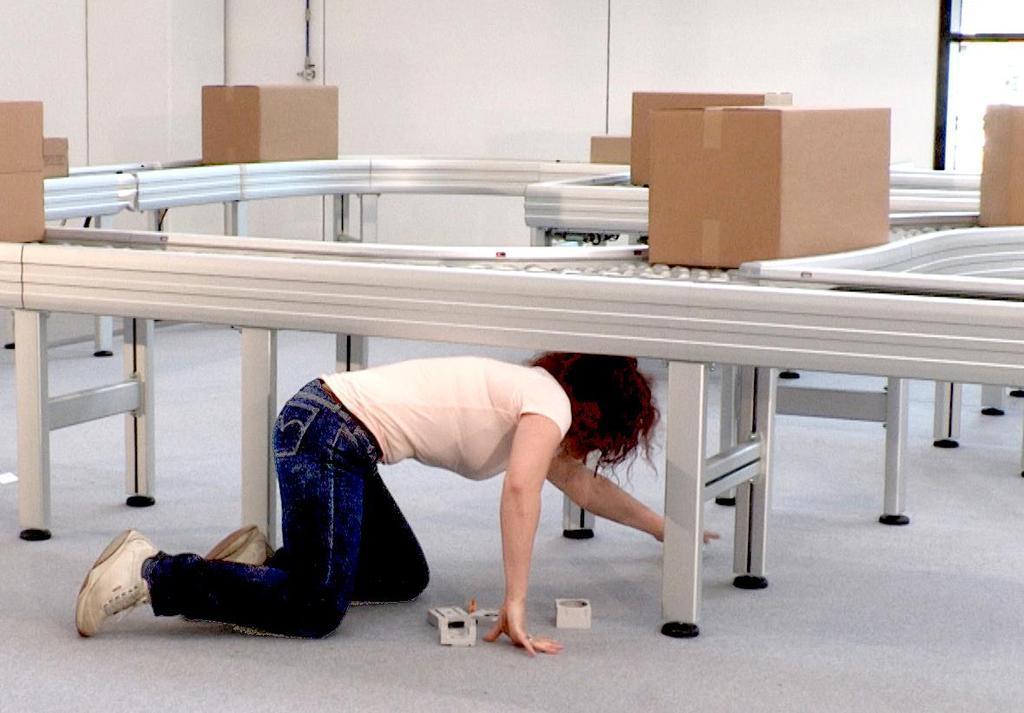 But this cannot happen anymore with the new avancon ZPC-Conveyor system.

"Such a video-clip I saw a few years ago in a TV health broadcast, which was about hair transplantation with former injured people," explains Dieter Specht.

“I couldn't get it out of my mind. I thought, how can a conveyor system be so unsafe, still today? - I decided to develop a new conveying concept, which has all drive elements installed inside the closed frames to become absolutely safe – even if somebody grasp from below.”

This secure and progressive conveyor system is for the internal transport of boxes, trays, work carriers, luggage, packages, bags, just of about 80% of all goods which have to be transported daily, million times, in the internal logistics in postal distribution and e-commerce companies worldwide. But this avant-garde system is different and revolutionary. It offers a significant improvement over all other unit handling conveyors systems.

Here, not only new rollers were developed, not just a new profile system or a different drive system, not only an intelligent electronic control system. This is really a remarkable futuristic, self-contained concept. 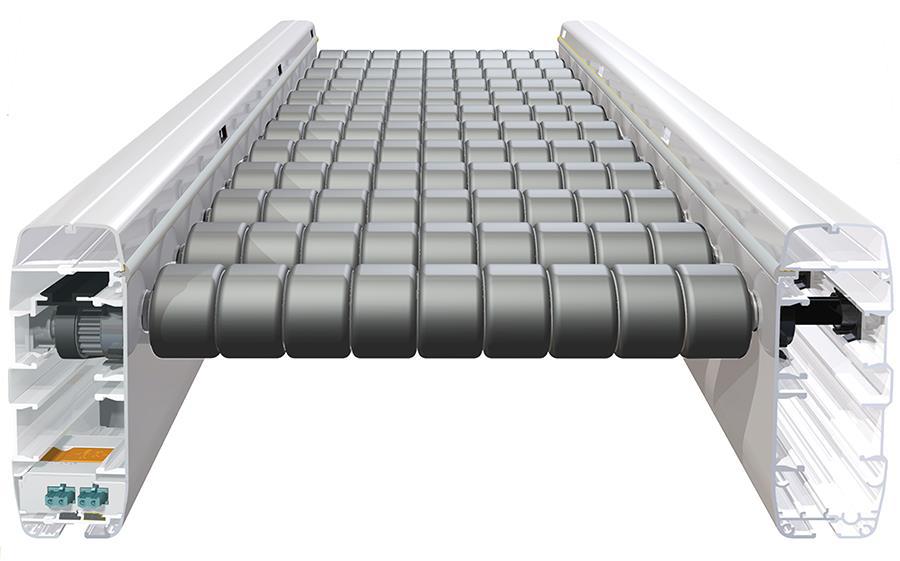 Dieter Specht, the co-founder of the Interroll Group, did not want to develop everything in and around the rollers as he had done before.

He explains: "The drive head was directly connected to the roller. At that time, we were a roller manufacturer. We left the responsibility to the conveyor manufacturer; how safe he designed his conveyors. Today rollers with connected drive heads are obsolete."

The new modern conveyor system is an integrated concept for universal applications for the internal logistic and distribution centres.

The inside mounted distinguished drive concept, the clever control concept and the refined roller concept are harmonised to a stunning aesthetical conveyor system, which is flexible, works autonomously, safely and reliably. Nothing is visible from outside, it is clean and suitable to fit to modern machine centres and modern architecture." This avant-garde "ZPC" system (Zone Powered Conveyor), is strict constructed into zones and reduces energy up to 84 %.

It is patented worldwide as a new platform and creates a unique experience. Everything is installed inside: the complete drive system via toothed belts or "2-V-belt" in curves. The control system based on the field bus "ASinterface" is able to interact with each higher bus or IT infrastructure. 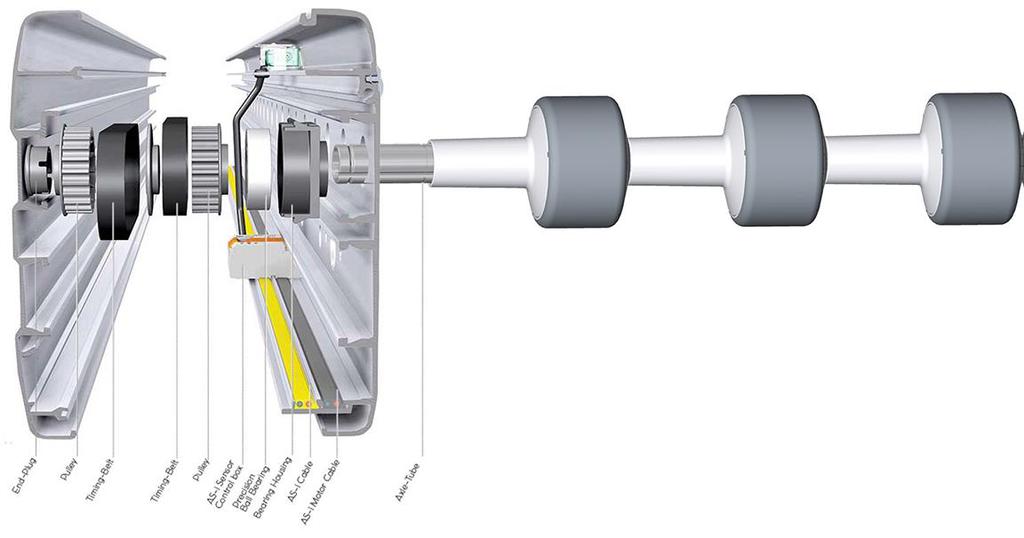 There is the closed frame system, made of natural anodized aluminum profiles, from which nothing sticks out, no screws, no rods, no cable connectors, no power-supply boxes at which one can be injured by walking alongside the conveyor, - and it feels like silk. Various roller-combinations are possible - very economical. The pitch of the rollers can be down to 38 mm, so that nobody can put his finger anymore between the rollers.

See here this Avancon Conveyors, installed at the security checkpoints in various airports in USA. People can walk alongside the conveyors – nothing sticks out, not even a screw-head. You can touch it everywhere, even from underneath. It is absolutely safe. Of course, there are curves, diverters, up-and-down-transport as well as special versions for the transport of sensitive goods.

The extrusion process of the patented aluminum profiles has been designed with ribs inside, in which all elements are simply snapped in, as the ball bearing housings, the controls, the photo sensors, the cables and soon a new flat motor. This means that everything is very fast and easy assembled and simple to maintain. The two profile shells are held together at the end just by a T-head bolt, which simultaneously serves to secure the foot-stands.

“We assume that this modern and modular conveyor system can compete with any other system, when it is installed and put into operation,” says CEO Christian Dürst.

“This futuristic material handling system will exceed all expectations and additionally, it creates emotions. Sure, the heart of each manager of a logistic centre will beat faster, if he imagines such a modern and avant-garde system in his modern distribution centre.”