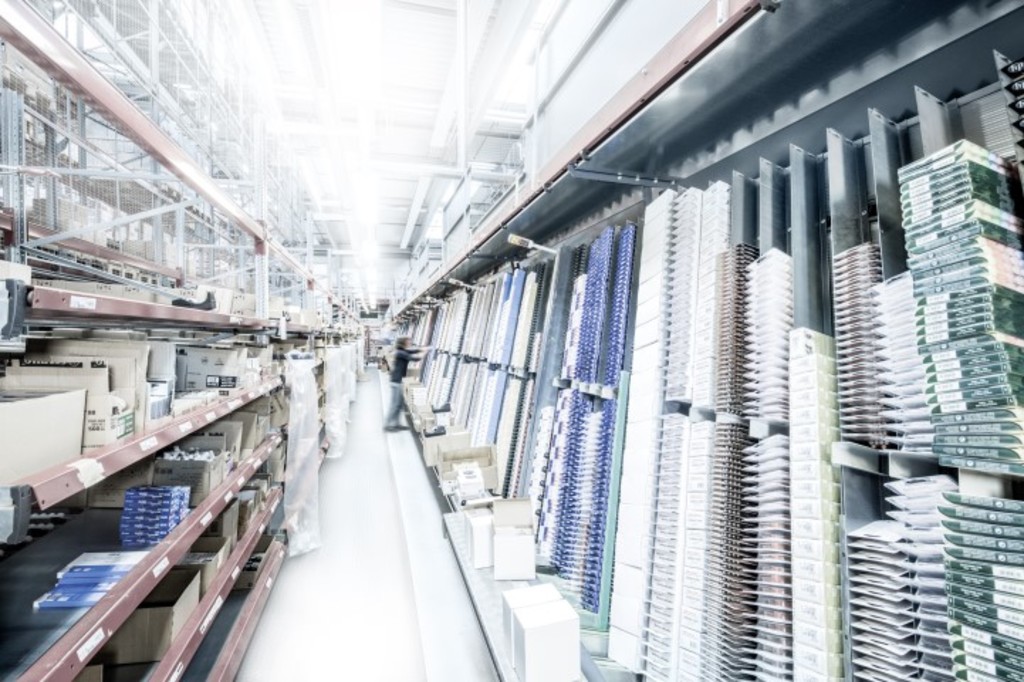 On the 82,000 m² property, a 31,000 m² logistics centre with four halls was built between May 2007 and April 2008. Back then, SSI Schaefer was responsible for planning and implementation of automation systems and a conveying system being the intralogistics partner of Office Depot.

An integral part of the automated systems installed in 2007/2008, as well as part of a modernisation project in 2015 by SSI Schaefer, are a fully-automatic A-Frame for picking fast movers, different conveyor systems, carton erectors and tape carton sealers and label applicators. 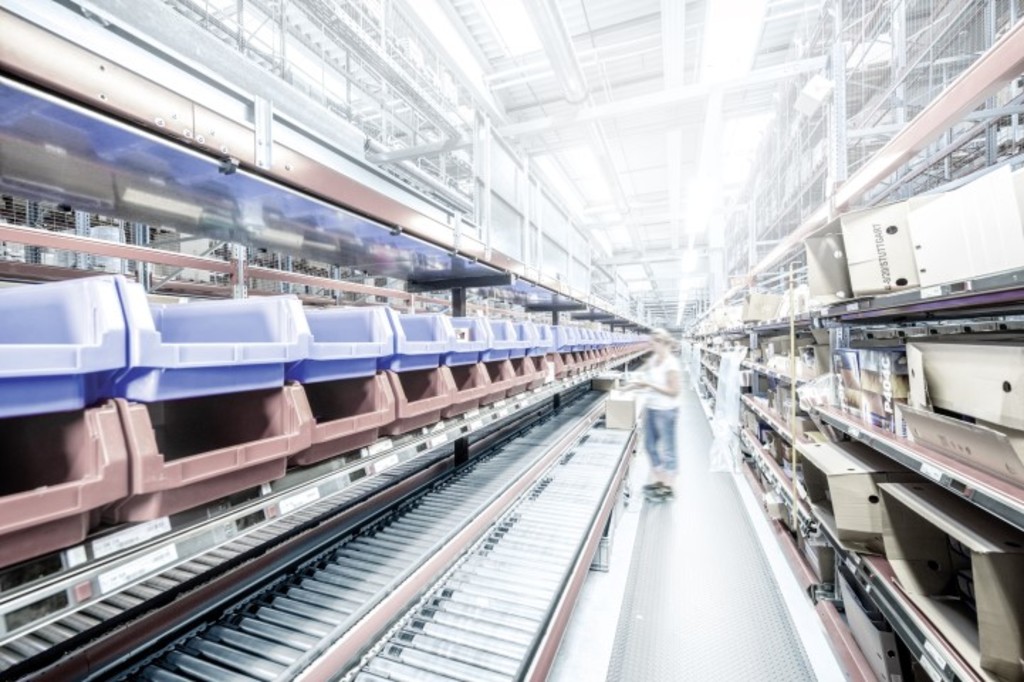 As a result of the continuous growth of the company, together with the consolidation and integration in 2015 of two other warehouse locations into the international distribution centre, order volume and product range grew rapidly. Capacities and performance of the logistics centre increasingly reached their limits.

“Currently, we have about 19,000 article masters and we process around 14,000 orders every day – this corresponds to a total of 60,000 order lines,” explains van Loon, the Office Depot project manager for the retrofit solution. “We have not yet had to tap into the extension potential of the company premises. The analysis of the existing system and the material flows provided sufficient optimisation capabilities that could be implemented using the available building structures in the retrofit project.”

In the end, the intralogistics experts at SSI Schaefer were commissioned to optimise the material flows and increase efficiency.

“The project was rather challenging with regard to design and the short implementation period,” judges Thomas Zach, customer service & support at SSI Schaefer, who was in charge of the project. “In cooperation with Office Depot, we first elaborated an optimum material flow concept, extended the conveying system correspondingly and installed two new picking loops with dynamic scales. The picking area was extended by a Pick by Light system. Lastly, the new components and material flows were integrated into the logistics software WAMAS.”

Another challenge was the tight time frame for the implementation set by Office Depot. Furthermore, the retrofit project was to be implemented without noticeable restrictions of the readiness for delivery in running operation. Nevertheless, within just five weeks, from the beginning of May until the middle of June 2018, the retrofit was completed. “We worked especially in off-peak times and at the weekends.” explains Zach. “Including planning times, production and installation during running operation, it took only three and a half months from order placement until completion of the project. In this time, a total of two new conveying system loops and eight new work stations were equipped and connected to the existing conveying sections. Several bypass sections were included to optimise the material flow.”

Optimising the material flows, free space in the picking area was created and static rack systems with flow racks were installed to increase the storage location capacity for picking. Top priority of the project was to increase efficiency of order processing and performance of the overall system. With the two new conveying system loops by SSI Schaefer, there is now a total of seven loops installed in the logistics centre. There, the source bins and target cartons are transported and distributed between storage locations, picking stations, shipping preparation and goods-out. The intelligently adapted bypasses relieve the system and ensure higher throughput of the shipping cartons on the almost 5 km conveying system. “Before the retrofit, the loops often formed bottlenecks due to accumulations of bins and cartons, which were all transported on the main conveying section,” says van Loon, praising the improvement thanks to the modernisation. 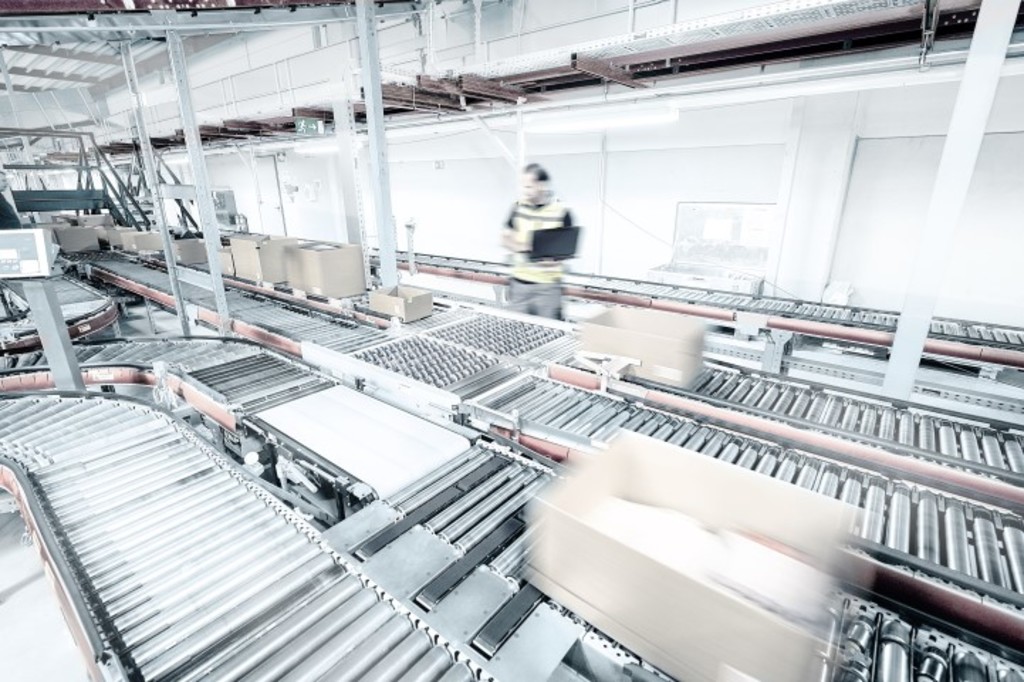 “These two new loops, which can also be used as buffer lanes in case of malfunctions, reshaped the material flows. The associated relief of the main conveying section considerably increases our efficiency and performance in order processing – also in the areas of the existing system.”

Suppliers announce their deliveries two days in advance. This information is taken over into the warehouse management system. Up to 1,000 pallets arrive in the logistics centre every day. At the beginning of the shift, more than three dozen reach trucks and very narrow aisle trucks, front forklifts and order picking trolleys populate the logistics centre. The ground conveyors transport the pallets after goods-in check and registration by scanning to the replenishment supply in the 14-aisle, manually operated, high-bay warehouse with 35,000 pallet storage locations or directly to the repacking locations, or wherever they are needed.

Order picking is done in different material flows using different picking systems and at separate processing locations. The fully automatic A-Frame by SSI Schaefer accommodates 750 fast-moving smallest parts. The items are continuously separated and the buffer locations of the A-Frame are manually filled from the outside. On the inside of the A-Frame the items are dispensed according to customer order onto a collecting belt and thus up to 1,000 shipping cartons are filled per hour. “20% of the daily small goods order positions are processed by the A-Frame,” explains van Loon.

Picking is also done at the so-called Pick by Light stations. Here, SSI Schaefer installed four new double work stations for picking fast movers and integrated these stations into the existing system. Special feature: The new picking loop was installed on a platform which is supplied by two spiral conveyors. Before the extension could be installed, the obsolete existing technology had to be dissembled during the running operation. “The two spiral conveyors had to be moved in the course of the project to install the new picking loop on the platform as well as to optimally design the new second conveying system loop on the lower level,” explains Zach. 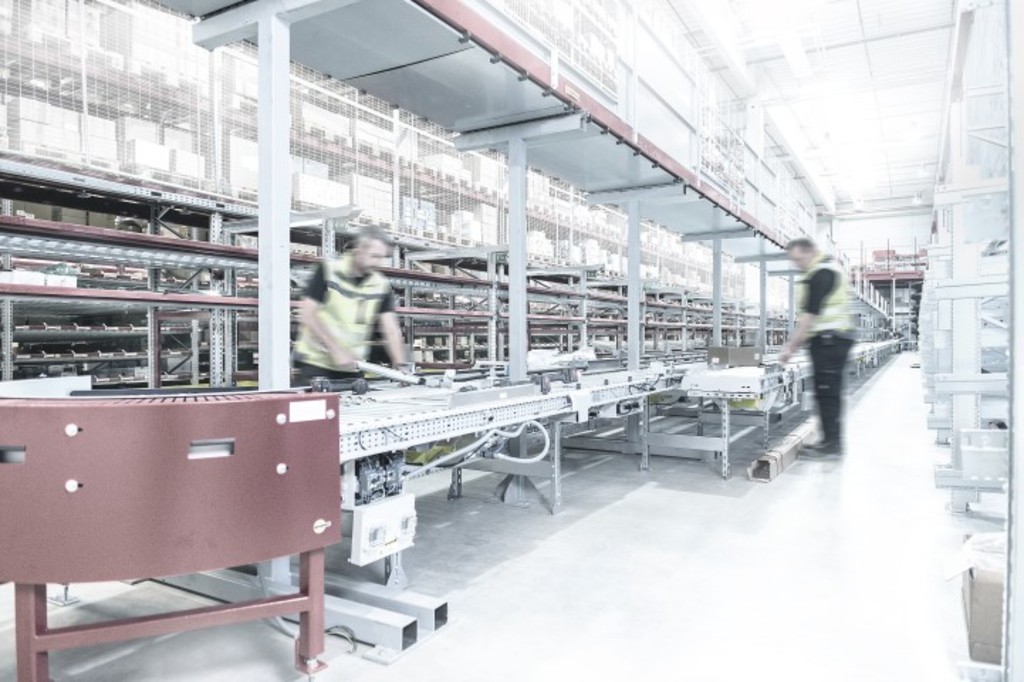 The work areas receive the target cartons on a conveying section. All cartons are prepared at order start by four fully automatic carton erectors and they are automatically labeled with a barcode to guide them through the system. In the seven picking aisles of the Pick by Light system, the conveying section runs along the flow racks. These racks are replenished continuously from the back with individual packages – several packing units behind one another – either supplied by forklift trucks from the pallet replenishment racks or directly from goods-in. Controlled by the logistics software WAMAS, the carton automatically stops in front of the storage location of the required item. Lights on bars below the storage location indicate the quantity of the individual positions to be picked from the source bins. After picking the corresponding number of items and placing them into the order carton, picking is confirmed and the conveying system transports the shipping cartons to the next picking stations or to shipping preparation.

The bypasses installed by SSI Schaefer in the existing system supply shipping cartons to the picking stations, also in other picking areas, and ensure optimum order consolidation. Up to 3,500 cartons per hour move on the conveying system of the overall system towards goods-out sorter.

For quality assurance in the respective picking areas, SSI Schaefer has equipped the new picking loops with dynamic scales. “This way, we are able to keep an almost constant zero error rate,” summarises the content Office Depot project manager van Loon. “The new loops, the additional picking stations and the optimally connected material flows considerably improved efficiency and significantly reduced performance times for order processing. The fast, constructive project progress would have been impossible without the excellent coordination by SSI Schaefer. The result has entirely met our expectations.”