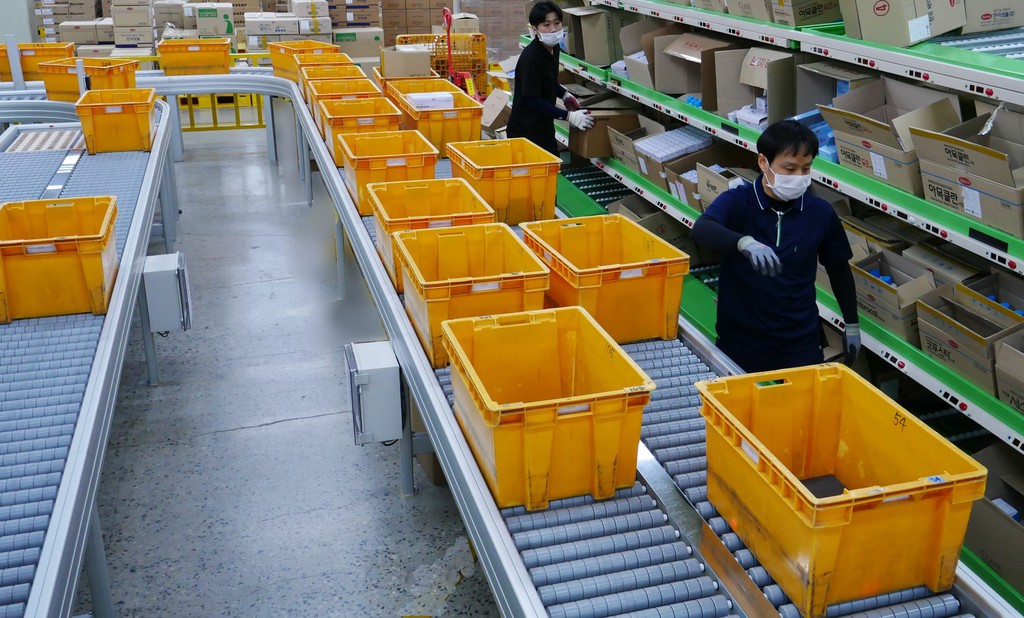 Fast-growing Korean firm Hanmi Pharmaceutical Co supplies B2B eCommerce customers such as chemists and wholesalers. Hanmi was growing but the order processing and picking lines were too slow to handle the orders in time. Its 10 years old equipment had to be replaced and the system integrator SMCORE proposed them the Avancon ZPC-Conveyor concept.

The logistics centre in Paltan, South Korea, operating by subsidiary Online-Pharm Co handles more than 10,000 orders / 13,000 boxes during Peak. SMCORE installed shelving and the pick-to-light system and a new picking zone concept using the Avancon Conveyor system. With this new solution, the bottleneck was eliminated.

The Avancon ZPC (Zone Powered Conveyor) System provides more dynamic buffer space with its ZPC-function. In addition, the new solution includes a looping system. When a certain picking zone is full, the next box goes automatically around the loop and tries to enter the same zone later, when the free space is available. Avancon OTUs, the Omni-directional Transfer Units, provide smooth and fast transfer where the box has to be diverted or transferred to another conveyor line or around a corner. Thanks to these most modern materials handling systems the entire line speed – including the existing area – has been increased by 17% including the picking performance.

The modular ZPC-System can be easily extended. So three more zone conveyors were installed. The client liked that the conveyors were safe. Everything protected inside the conveyor frame – including the drive system and the control system. Nothing sticks out – not even a screw-head. Now operatives freely work around the Avancon conveyors.

Avancon was able to manage the project within the required time thanks to its “plug-in” concept. All modules were pre-assembled, pre-programmed and tested before shipping from the factory in Switzerland. It also provides more vertical space because there is no more cable ducts underneath. This is a great advantage for those who have to follow the global GMP regulation because now they can clean the space underneath the conveyor very easily.