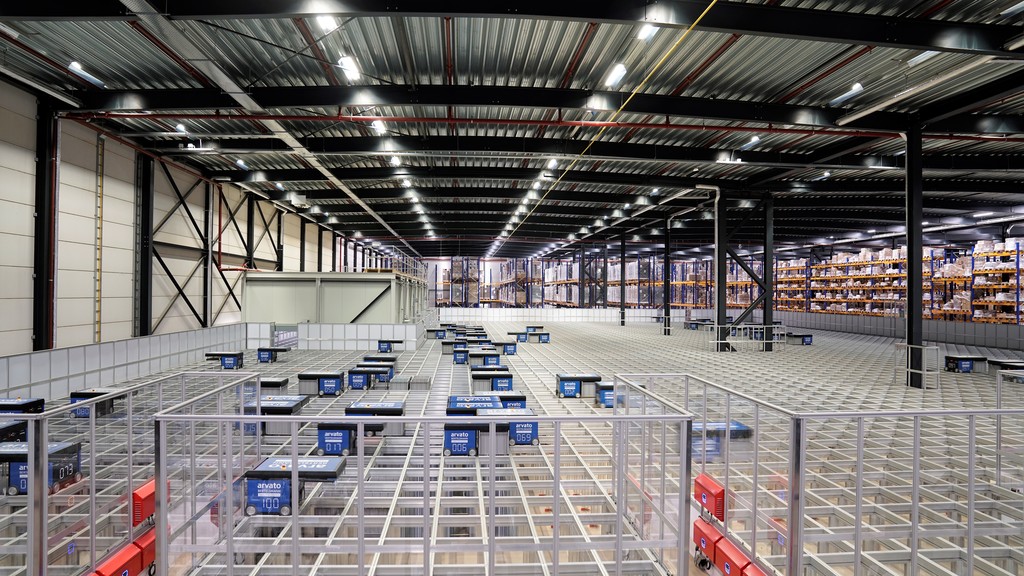 WITH THE implementation of an AutoStore system powered by Swisslog, Arvato Supply Chain Solutions opted for a future-proof solution in 2019 to process the e-commerce orders of Rituals Cosmetics Enterprise. As a result of continuing growth and the impact of COVID regulations, the scalable storage and retrieval system was expanded last year - significantly ahead of schedule.

Arvato has been taking care of logistics for all of Rituals' e-commerce orders since 2014.

“Automation is not at the expense of the employee in logistics. Manual work will still be necessary, but the automation will help avoid repetitive tasks. No one can deliver peak performances for eight hours.”

"It started in Venray (the Netherlands), with two packing tables and a number of shelves," explains Maurijn Hellenthal, Senior Logistics Engineer at the logistics provider.

The logistics operation moved to Heijen in 2019 and no longer bears any resemblance to that of seven years ago. Rituals is one of the fastest growing retail companies in Europe and has an average growth of 30 to 40 percent per year. "We have expanded with the customer and automated a large part of the processes," continues Hellenthal.

One integrator, one software system

An essential component of the logistics automation is the AutoStore system, supplied by Swisslog. "We were looking for a scalable and flexible system, which would suit the expected volume growth," explains Hellenthal. The system also had to be able to cope with the peak output. In peak periods, the number of orders increases significantly, from an average of 10,000 to over 25,000 per day.

Equally important for Arvato was the need for a single point of contact; one system integrator with one software system that controls all other systems and provides feedback to the WMS. "That's where Swisslog took a lead over other AutoStore providers," Hellenthal points out. "They offer everything from one source, with full control of the processes taken over by their SynQ software."

Expansion accelerated due to COVID

Swisslog provided the AutoStore solution in two phases. During the first phase, in 2019, 36 robots, six picking stations and two inbound stations were installed. The grid accommodates up to 36,000 bins. More than 75 per cent of that capacity (28,000 bins) is being used. To be able to store gases, aerosols and flammable liquids in the AutoStore system, a special bunker facility was installed. This makes the AutoStore system at Arvato the first system in which the storage of hazardous goods is fully integrated. 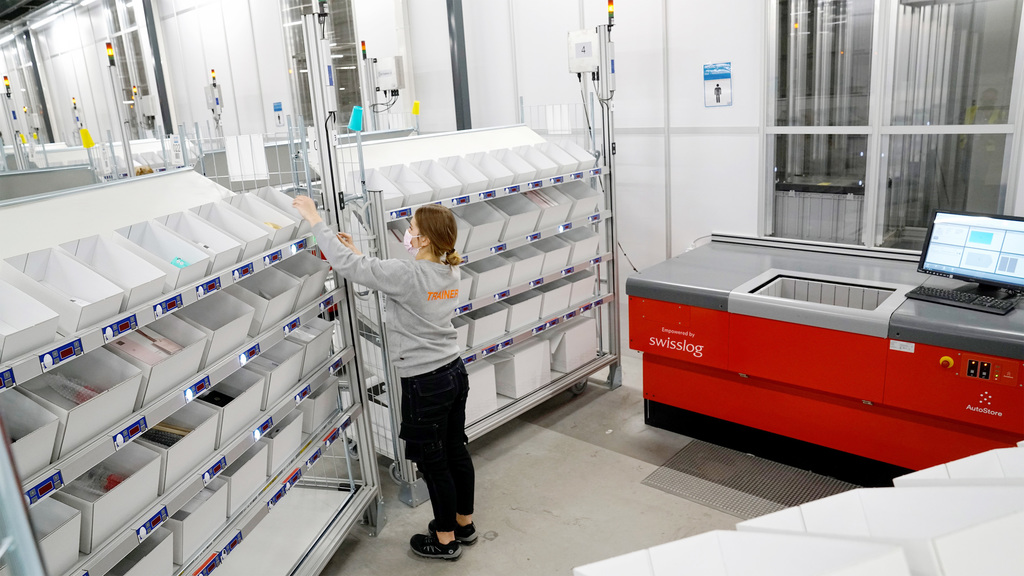 The second phase was planned for 2025. However, due to the COVID pandemic - and all restrictive regulations - the expansion of the system was brought forward significantly. Shops remained closed and the number of e-commerce orders rose sharply. Consumers went on a hoarding spree and ordered much more in a blink of an eye. A day after Germany announced a lockdown because of the second wave, no less than 40,000 orders were placed. Hellenthal: "Fortunately, Swisslog was able to scale up quickly; 15 new robots could even be delivered immediately." In total, Swisslog supplied 65 additional robots. The number of picking stations was doubled. Because the grid was already prepared for this expansion, downtime was kept to an absolute minimum and the expansion was realised in just a few weeks.

Incoming orders are assigned to a put-to-light pick cart by SynQ, in the most logical order. The system indicates in which of the six standard carton sizes orders will be picked. Up to 30 orders can be picked per cart.

The order picker first walks the cart through the fastmover lane, where triple A orders and larger products are assigned to the correct order box. Next, the carts are placed at the picking stations of the AutoStore system where the orders are completed using the put-to-light principle. Four carts per station, i.e. 120 orders, can be picked simultaneously. The SynQ interface is configured to display the status of orders clearly and briefly.

Once all orders have been picked on a cart, the cartons are placed on a Swisslog QuickMove conveyor system and further processed. If required, they are directed to the value added service department, where customer-specific tasks such as gift wrapping and greeting cards are carried out. The bulk of the orders, some 80 percent, are handled automatically, with the boxes being made to measure so less air is transported. "Where previously a maximum of 60 orders could be placed on one pallet, up to 120 orders now fit on the same pallet. This reduces our CO2 footprint considerably", says Hellenthal. After the boxes have been labelled, they are automatically sorted to the right carrier and sent to the end customer.

Automation obviously has an impact on the entire organisation, including the employees. Arvato consciously chose to involve permanent staff in the changes on an ongoing basis. "That way you create support and really make the most of the new approach," says Hellenthal. He believes that the automation fits in perfectly with Arvato's aim of being the most innovative, data-driven logistics service provider. "That transition has started and will take greater shape in the coming years," he says. "However, automation is not at the expense of the employee in logistics. Manual work will still be necessary, for example to fulfil the VAS activities. New jobs have been created and work has been lightened, though." To avoid repetitive tasks, employees at Arvato rotate. "No one can deliver peak performances for eight hours. Moreover, the work must not become monotonous," concludes Hellenthal.