It is rare to see a robotics start-up in such a strong position to hit the ground running, but Geek+ brings a formidable, scalable and flexible warehouse automation proposition. Handling & Storage solutions editor Simon Duddy reports. 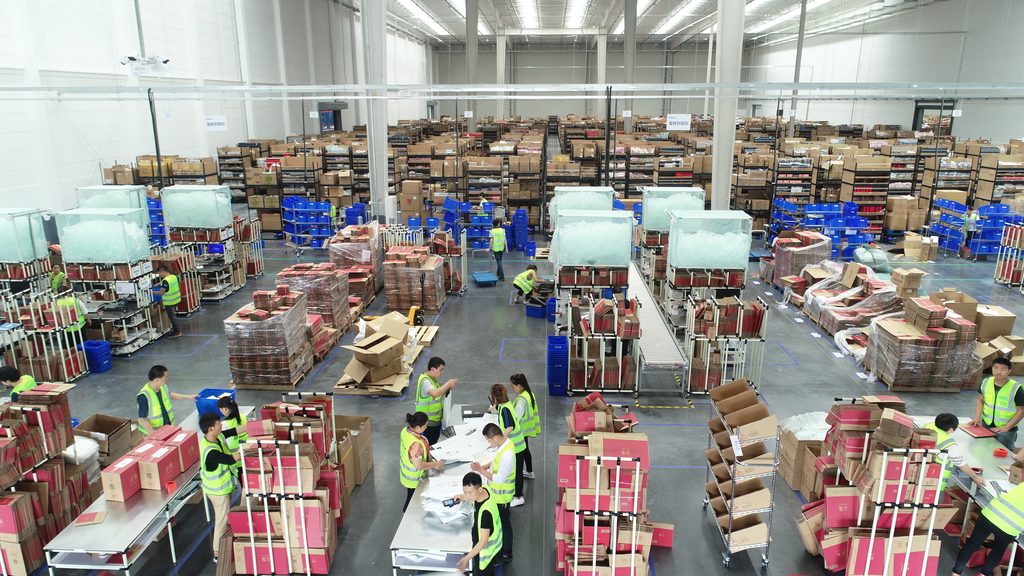 There’s many warehouse robot providers out there, with lots of whizzy tech on show. Perhaps what makes Geek+, an innovative Chinese warehouse robot start-up, stand out most is the extraordinary level of experience it has gained in its relatively short history. The company runs large warehouses in China on a third party basis for eCommerce retailers and so its technology has proven itself in a way few, if any, other start-ups can claim.

Lit Fung, MD, overseas business, Geek+ explains: “Our development in China has given us a great opportunity to fine tune our AI. In the three years since our start up we have gained a lot of project experience. The eCommerce order volumes in China have been huge.”

Its 3PL work is effectively a live test bed for Geek+ robots. The company has six self-operated warehouses, four of them representing 2 million sq ft. In 24 hours on ‘Singles Day’, Geek+ robots handled 5 million orders, with 2.5 items per order. 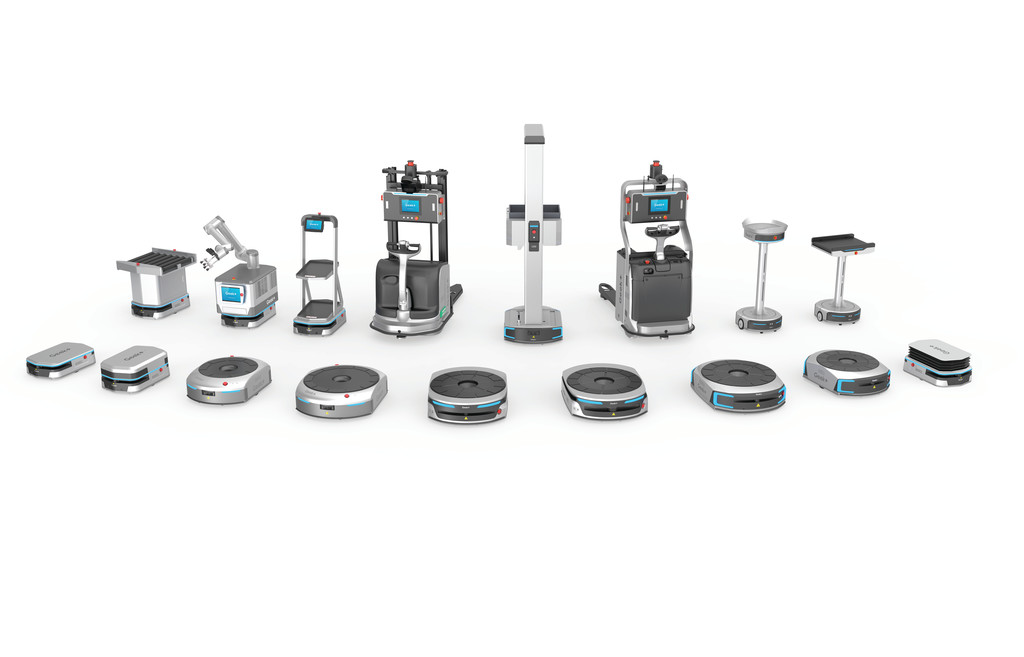 Lit adds: “Initially, as a 3PL, we took on a lot of extra staff to help clients through Peak but it didn’t make much difference. Instead, we focused on improving the robots and optimising AI by analysing data, deploying machine learning on routes, product type and order profile and this has driven efficiencies and cost savings for customers.

“When people ask if our system is robust, this is what we point to as proof. This experience gives us a great head start in implementing robots for any warehouse in the UK.”

In terms of the AI, there’s two key fronts, says Geek+, to find the most efficient route and carry out SKU heat maps. Once shifts have finished, robots switch to housekeeping mode, and move the faster moving SKUs closer to the picking stations.

Warehouse and logistics managers often think automation requires a massive investment, and a huge volume of orders to make the leap worth it.

According to Geek+, this isn’t the case.

Alex McCutcheon, senior sales and marketing manager Europe, Geek+ says: “They assume it is a choice between a manual warehouse and a big, fully automated system. To go straight to a £10m plus automation investment is a really big risk and challenge for people.

“With Geek+, you can start off very small with a few robots. It’s very flexible and scalable. It can help a manual warehouse grow and become more efficient, rather than waiting for that point when a major switch is required.”

The cost for large projects is high, it can be upwards of £10m in automation alone, with a payback period of typically 5-7 years, says the firm. With Geek+, it is said to be under three years.

The key offering of the Geek+ robots is they allow warehouse picking to be carried out on a higher throughput and lower cost basis than a manual warehouse.

Geek+ says it has a number of key advantages compared to other picking solutions, such as relatively low cost of investment compared to traditional automation, greater flexibility, and relatively fast start-up time.

A sign of the solution’s flexibility is that the company is marketing hard at global 3PLs. 3PLs typically don’t automate much, partly because of the short contracts they win, because they typically have a short time to present a tender (and larger integrators take time to provide this information) and because many automated solutions lack flexibility.

Alex says: “Geek+ is different. When a contract finishes, it is very easy to move the system, as none of it is fixed to the floor. You can quickly move the racks and robots, put QR codes on the floor, and install wi-fi for communication. That’s something 3PLs have not had access to before.”

While the robots can be delivered and installed relatively quickly, the warehouse does have to be up to a certain spec. These include flat floors (+/-10mm), fencing for the robots (if you want them to go full speed) and reinforced mezzanine floors, if deployed there. The robots move at 1.5m/s with a 1,000kg load.

Alex continues: “3PLs typically tender on a market price, which is dependent on labour costs. If they invest in their own robots, they can quote slightly under for the business, and then make it much more efficient, helping them to keep the business and earn more profit.”

The robots can also help firms plan for Peak. A company can buy robots to fulfil average throughput, and rent robots for Peak times. This contrasts with traditional automation, which is either designed for Peak, and under-utilised most of the year, or designed for average, with Peak reliant on agency labour.

DSV is a key 3PL client working with Geek+.

Lit explains: “We have worked with DSV for a long time, it is a traditional 3PL, and its priority is flexibility, as it is granted short term contracts in many cases.

“We were able to give them 60% labour cost savings, with an ROI of 2.5 years, so it makes sense for a 3PL on a 3 year contract – it’s still cheaper than a manual warehouse, but at the same time, is delivering higher throughput, and making progress on safety, sick leave, and training costs.” 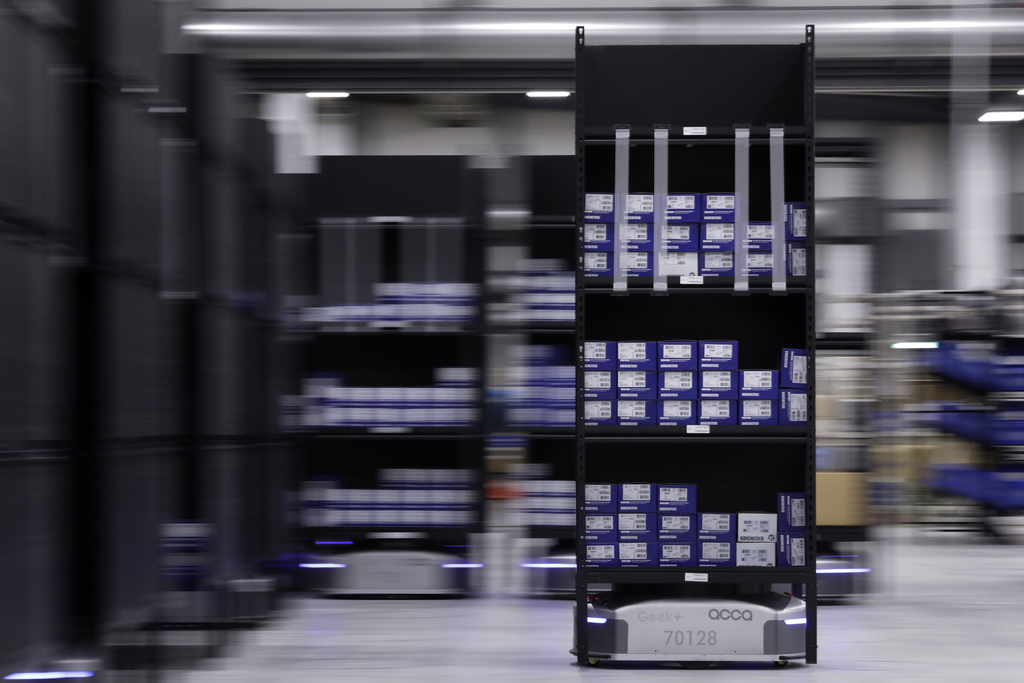 Quick implementation time is also said to be a benefit of robots, particularly for eCommerce players.

Alex says: “Fast growing eCommerce firms need to boost their logistics quickly to keep pace. To take the traditional automation route, you invest £10 million and wait 18 months. With robots, you can spend £1-2m and go live in 4 months.”

Once a system is up and running, new robots can be added in one month (shipping time from China to the UK).

“For traditional automation, it can take 9 months to make even small conveyor changes. That’s a big area of frustration for eCommerce companies,” adds Alex.

As well as having a picking solution, the Geek+ robots can also be configured to carry out a range of warehouse processes, with separate systems for Moving, Sorting and Storage Retrieval.

Lit says: “We developed products for different processes but the principle of light infrastructure applies throughout. The aim is to reduce labour costs throughout the warehouse.”

Geek+ is in the process of building a Robotics-as-a-Service (RaaS) scheme to work with big 3PLs. This is designed to help 3PLs service short term contracts. Geek+ will set up the warehouse, install the robots and charge the user per transaction, e.g. per pick, etc.

Geek+ anticipates it will add buffer robots to its initial UK customers. As well as providing a contingency for these customers, they can also be used to supply robots for Peak, or as a rental pool for new customers.

Geek+ opened a new production facility this year and by the end of the year it will have installed robotics to build its robots. This will double the number of robots that can be produced, with the target 10,000 units per assembly line per year.

While warehouse automation is front and centre at the moment, Geek+ has an end-to-end supply chain vision, with plans to introduce robots for the manufacturing setting as well as autonomous last mile delivery vehicles.

“We have a won a Red Dot Design Award for the Swarm Lifting Robot - hexagonal bots that join together to mimic the shape of a large object and move it. This could be used to move a heavy T-shaped object in a manufacturing setting, for example,” says Alex.

“We have ambitions to run robotics across the whole supply chain, using data mining and analysis to become experts and leaders.”