Celebrating the best of the best in the lift truck industry

On Saturday 30th March, hundreds of guests drawn from the entire spectrum of the fork lift truck industry gathered at the International Centre in Telford to recognise the sector’s brightest and best with its most prestigious honour: an FLTA Award for Excellence. 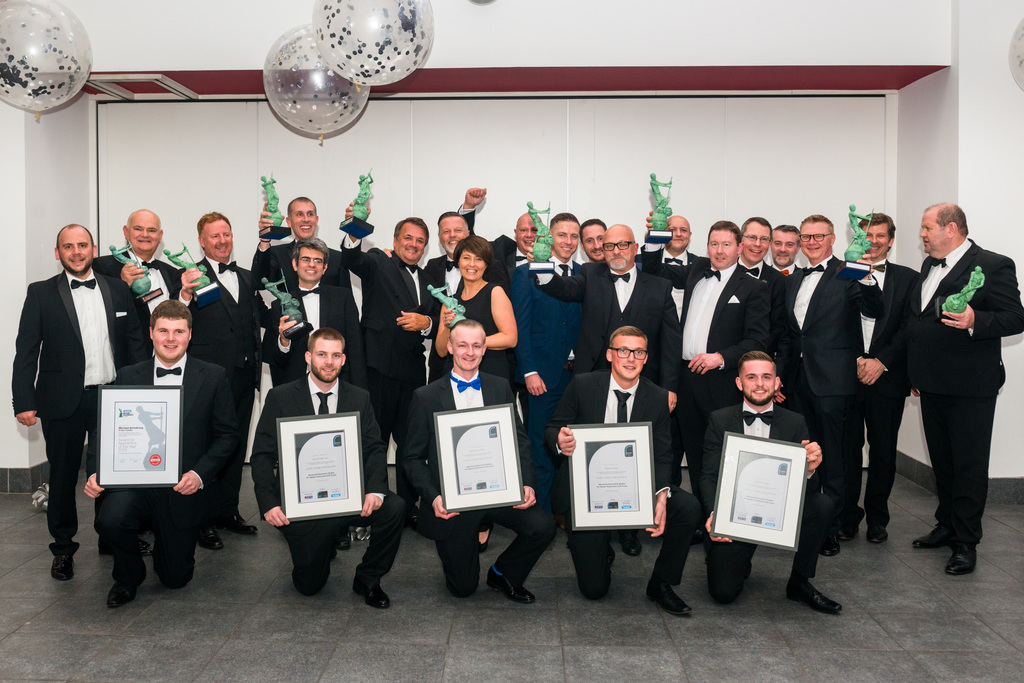 TV host Mark Durden-Smith compered the event’s 25th year in style, guiding the crowd through a glittering tribute to the companies, teams and individuals who have done so much to innovate, raise standards and help operators work more effectively.

The night opened with a look to the industry’s future, celebrating the graduation of Level 4 apprentices from the Forklift Training Engineering Centre.

Handling & Storage Solutions is proud to be media partner for the FLTA Awards.

Big winners in the product categories included Baumann’s H2GX60 in the Environment category, sponsored by TVH. The first hydrogen powered compact sideloader, the Baumann was praised by the jury with the hope that its pioneering use of the fuel could act as a catalyst for the technology to be more widely adopted.

Combilift added a sixth Archie statuette to its haul with taking the FLTA Award for Safety, sponsored by Trelleborg Wheel Systems. The exceptionally high capacity of its powered pallet truck really caught the jury’s attention for its potential to replace larger counterbalance trucks in pedestrianised areas.

Picking up their third win in the Ergonomics category, sponsored by Triathlon Battery Solutions, was Hubtex for its MaxX multidirectional sideloader. Jurors were thoroughly impressed with its clear operator-first approach to design. In particular they praised the highly adjustable controls and display along with the remarkably spacious cabin.

In a hotly contested field, the Innovation Award, sponsored by IBCS, went to a first-time winner: Sany, for the H9. The win marked the 100th product Archie handed out in Awards history. The jury made particular note of the H9’s nitrogen-charged accumulators which store energy and act as auxiliary lifts.

Decided entirely by the votes of FLTA Members, the Archie for Supplier of the Year, sponsored by Yale Europe Materials Handling, went to Rivermore Asset Finance.

The panel was heartened to see a number of incredibly strong entries for this year’s Safe Site category, sponsored by STILL Materials Handling. The winner, Kellogg’s, had overcome many of the issues associated with moving into a site with the size and complexity of its Manchester facility.

Some of the evening’s warmest applause was received by individual winners:

Following the F-TEC Level 4 apprentice graduation, the spotlight turned to the Level 3s with the Apprentice of the Year category, sponsored by Doosan Industrial Vehicle UK. Being recognised for his skill and dedication with a certificate and cheque for £500 was winner Michael Armstrong of Kridan Forklifts.

The Services to the Association Award, went to “probably the nicest man in the industry” Andrew Woodward. Having been hugely popular in his time on the FLTA Board, as Vice Chair, Chairman and President, the announcement was met with huge applause.

For his expert knowledge and work with Transmon Engineering, Steve Coley was named winner of the 2019 Services to the Industry Award, sponsored by Flexi Narrow Aisle.

The ceremony closed with a slight break from tradition as the Association announced the 16th recipient of its Lifetime Achievement Award, sponsored by Toyota Materials Handling. Rather than just one, there were a couple of winners this year in Peter and Carole Crawford of HFT Forklifts. As the couple were in Spain during the ceremony, the audience was treated to a video of the Crawfords being surprised with the news earlier this month, before their daughter Zoe came to the stage to accept the award on their behalf.

The FLTA Awards has served as a ‘Pick of the Year’ for the materials handling industry’s best products for 25 years. It was established to encourage and reward those striving to raise standards.

“The entries get stronger with each passing year, and just being named on the list of Finalists is an achievement by itself. Even if you didn’t go home with an Archie, your efforts are all greatly appreciated It’s important to recognise those who are moving us all towards a safer, smarter, better future.”

The evening’s entertainment was sponsored by Linde, with LED dance troupe Supernova lighting up the stage, and the crowd-pleasing Rick Parfitt Jr Band entertaining a packed dancefloor as guests talked, laughed and danced into the small hours.

“It was great to see so many new faces along with the old friends — some of whom have been coming since the very first Awards.” adds Mr Nealon. “It was a fantastic way to cap off a quarter century and I’m looking forward to seeing what next year brings!”

Below follows a full list of winners, their categories and Award Sponsors: