Facing a market that is close to saturation, Pall-Ex is seeking to add services to stand out from the crowd. Simon Duddy met Pall-Ex at its Midlands hub to hear the vision As the pallet network market has matured, 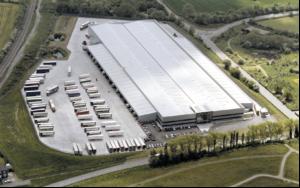 Facing a market that is close to saturation, Pall-Ex is seeking to add services to stand out from the crowd.

As the pallet network market has matured, Pall-Ex has moved to diversify its offering, developing services that add value to customers.

Managing director, Adrian Russell (right), points to the failure of two new pallet networks to establish themselves in recent years as evidence of this maturity.

"We've got 10 networks fishing in the same pool so Pall-Ex, under the leadership of Hilary Devey, has tried to be innovative and diversify into markets where more than a drop-and-go service is required." Russell sees the green challenges faced by his customers as an opportunity to enhance Pall-Ex's environmental performance and as a way to develop a unique offering for customers.

It might not be the most common view among the chattering classes but Pall-Ex believes pallet networks offer environmental benefits and it is keen to develop this.

Patrick Chamber, sales and marketing director at Pall-Ex takes up the argument. "Pallet networks run trucks with higher loads so have taken traffic off the road, cutting emissions.

"A new initiative from Pall-Ex called Eco Drive aims to build on this, and through it we hope to dominate the moral high ground that comes with being an environmentally sound pallet network." The scheme has been piloted with The Body Shop and environmental waste company The Green House. It uses the inbound vehicle to take back recyclable items of waste, rather than using a skip and separate waste vehicle, both of which add cost and add material to landfill.

The vehicles take recyclable packaging bound on pallets back to the hub. The company, along with some of its members, has invested in its own bailers. The waste gets bailed and The Green House collects these once there is a full load and it is recycled.

Pall-Ex will also certify that the waste has not gone to landfill.

The service is being trialled by four Pall-Ex members - Pall-Ex Nottingham, J Longs & Sons based in Leeds,Mini Clipper Logistics in Leighton Buzzard and CJ Express in Hull.

The Eco Drive initiative dovetails neatly with another of Pall- Ex's services - Retail Plus. This white glove service differs from drop-and-go in that the company will decant, take pallets in and put the products into the customer's storeroom. The key advantage for the retailer is that it allows them to keep staff front-of-house where they can be used most profitably.

The scheme sits well with Eco Drive as waste collection can be included in the package. Pall-Ex is in discussions with a major retailer which has pledged to cut its carbon emissions by 20% in 2010. The pallet network believes waste collection after deliveries will take the retailer a significant distance towards this target.

MD Russell continues: "We decant pallets at the point of delivery, therefore we keep control of them in the distribution cycle.We are investigating running Pall-Ex pallets where we have a closed loop arrangement with some customers." The Coalville-based pallet network is also getting involved in big ticket home deliveries and has engaged in special projects requiring lateral thinking and utilising its national coverage.

For example, Pall-Ex, through one of its members, won a contract to fit 300 iPhone point of sale installations in 300 Orange stores throughout the country.

Russell enthuses: "We were approached and the installations went very smoothly although they all had to be installed within 7 days ready for the quick launch.We were able to train drivers to install the equipment and feel we will be on the radar for this kind of work in the future." As well as possessing a desire to add strings to its bow, such as collection of recyclable packaging, Pall-Ex is keen to improve its own corporate social responsibility.

The firm says noise and light pollution can be issues and therefore it makes an effort to engage with the local community.

Over the years, the pallet network has funded double glazing for local properties, contributed to charitable causes, and opened up its premises for the use of local community organisations.

"The industry hasn't got a particularly good name, so how we integrate with the local community is important.We're not perfect, but we work at it," says Russell. "At a previous site, the local community were sad to see us go.We did more for the area in 5 years than the previous tenant achieved in 50 years."
MORE FROM THIS COMPANY