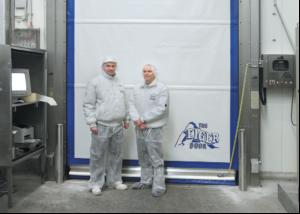 Union Industries has continued its expansion into Europe with another installation in Germany. The Yorkshire based company has installed an Eiger Door at CDS Hackner.

Union's Eiger Door meets the demands of CDS Hackner's cold storage facility. The door is positioned between an area maintained at 8Â°C, to a freezer which has a regulated temperature of -24Â°C.

Herr Hanspeter Hackner said: "I was impressed with what I saw of the Eiger Door at the Intercool Exhibition and I was interested to see what Union Industries could achieve at our factory.

"We operate to very strict rules in the food industry and I am pleased to say the Eiger Door meets these regulations. Its low maintenance and minimal downtime capabilities were particularly attractive as this is key to our productivity and temperature control in our freezer area." The Eiger Door replaces a vertical rise insulated door which was constantly being damaged by internal traffic moving product in and out of the freezer. This in turn, caused issues with snow and ice build up around the opening, resulting in increased energy use due to the freezer requiring more regular defrost cycles.

Opening at 1.6 metres per second and closing automatically after a short regulated time, the Eiger allows for continuous traffic flow without compromising freezer temperature and prevents the build up of ice and frost around the doorway. Consequently, energy savings can be made resulting in reduced running and operating costs of industrial cold stores & freezers. To meet the high hygiene standards required by CDS Hackner Union has finished many of the door's parts in non-standard Grade 304 stainless steel.
MORE FROM THIS COMPANY