Time to call in the heavies 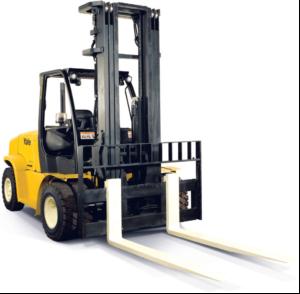 Yale has released the 8-9 tonne capacity Veracitor VX forklift truck which has been designed for the lumber, steel, concrete, brewing and chemical industries.

The move expands the Veracitor VX series which was launched in 2005, and is said to bring previously unavailable levels of energy efficiency, productivity and design to the heavy duty market segment. The Veracitor VX 8-9 tonne series is available with diesel or LPG engines.

In addition to increased lifting capacity, further upgrades have been introduced to both the Value and Productivity models.

The new Veracitor VX also features increased drawbar pull in first gear for use on gradients with second and third gears providing maximum engine efficiency in applications where longer travel distances are common.

The Productivity models in the range now feature a three speed extended Techtronix 332+ transmission offering all of the features seen on the Value models but with a number of additional functions including Dynamic Auto Deceleration System (DADS), Throttle Response Management (TRM) and Auto-Speed Hydraulics (ASH) with Automatic Inching Control.Working in a similar way to ADS, the Dynamic Auto Deceleration System allows the operator to slow down the truck without using the brake.

For applications demanding a clean burning forklift truck, a Diesel Particulate Filter system has been developed for the Veracitor VX range to reduce the potential environmental contamination caused by operating diesel trucks. The filter captures diesel particle emissions and particle matter (PM) and prevents their release into the atmosphere leaving the operator with a much cleaner working environment.

Also with the operator in mind, the Veracitor VX range is available with built in air conditioning for warmer climates or applications where the operators are required to work in challenging conditions such as factories and chemical plants.
MORE FROM THIS COMPANY