Power behind the profits 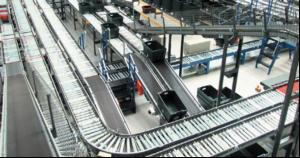 The recent record Christmas sales achieved by John Lewis has been well reported but less widely known is that this performance was powered in part by a £45 million national distribution centre designed and installed by Knapp. The 650,000 sq ft NDC - located at Magna Park,Milton Keynes, at junction 13 of the M1 - features 8.4km of conveyors.

John Lewis senior project manager, John Munnelly says: "We are pleased that our new NDC has been able to help support the John Lewis businesses in achieving these excellent trading results.

Handling just over two million units at peak was a real achievement, especially as it has only been operational for six months." John Lewis committed to investing in the facility back in 2006 and commissioned Knapp UK to design and install the site's highly automated internal logistics.

The £25 million automated handling system drives the distribution for some 87,000 products and contains over a quarter of a million bin storage locations. It also includes 13 ASRS cranes, each running in aisles 78m long by 15m high and handling slower-moving products in totes that are stored double deep. The Order Storage and Retrieval (OSR) system stores faster-moving lines in 21,000 totes. Both the ASRS and the OSR feed totes to 33 order picking stations where pick-to-light and put-to-light technology can achieve up to 1,000 picks per man-hour.

Craig Rollason, head of sales & marketing for Knapp UK, says: "A major challenge was the fact that we needed to provide storefriendly deliveries, despite the fact that every John Lewis department store is laid out differently." Store layout - even including which product lines belong in which department - has always been the preserve of the md within each John Lewis branch. This fact gave the project an added dimension of complexity, as did the need to accommodate the differing distribution needs of the retail stores and johnlewis.com under one roof.
MORE FROM THIS COMPANY