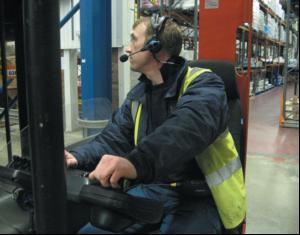 BAKO NW specialises in the supply of ingredients and other food produce to bakery operations across NW England, the Midlands and North Wales and is one of five BAKO co-operatives which together constitute one of the largest nationwide distributors to the food industry.

Investment in Voice was prompted by the company's everexpanding customer base, which now ranges from traditional bakeries to new companies supplying the convenience sector, and its commitment to ensuring its warehousing operation functions as efficiently as possible. BCP was chosen because of the close functional fit of its Voice warehouse solution to BAKO NW's specific requirements and the acknowledged success of the system at other distributors.

BCP's complete suite of Accord voice warehouse modules has been interfaced to the company's incumbent warehouse management system and is now operational across all warehouse activities.

Benefits started to materialise as soon as the system was implemented in goods inward with faster handling of deliveries and more accurate stock information on the warehouse system. Picking accuracy has improved to 99.95% and order fulfilment to 99.5%, allowing the company to dispense with an expensive labou r-intensive double-check system.

Improvements in picking productivity have saved around an hour per day across the whole picking shift and 5 man days effort per week.

Sean Hobson, Bako NW logistics manager, says: "BCP's voice solution has proved a superb fit to our requirements quickly delivering the improvements we anticipated - around £50,000 pa in labour savings and over £26,000 pa from improved picking accuracy. What's more, the workers all love it - from the supervisors to the lads on the shop floor. None would want to return to the old paper-based system."
MORE FROM THIS COMPANY