iForks saves time and hassle by integrating a wireless weighing system into truck forks.The FLTA was impressed enough to award it an Archie for innovation Mobile weighing specialist RAVAS has won the Fork Lift Truck 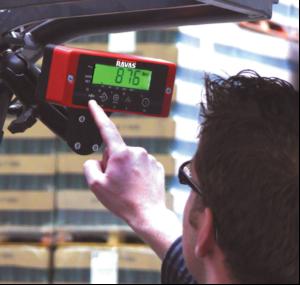 iForks saves time and hassle by integrating a wireless weighing system into truck forks.The FLTA was impressed enough to award it an Archie for innovation

Voters throughout the industry were impressed by the iForks "plug and weigh" premise; with the entire system, including electronics and power supply, integrated into the truck's forks, relaying the information wirelessly via Bluetooth technology.

FLTA president John Chappell said: "The Innovation Award is perhaps the most prized of our Pick of the Year. It signifies that the winner has an ability to create something unique, powerful and a little bit special." iForks is a wireless scale system that is integrated in the forks.

This brings numerous benefits including speed and ease of use, with no external cabling to contend with. The firm says the weighing system can be installed on to any forklift truck in minutes. Then any load lifted by the truck is instantly and accurately weighed to 99.9% of the applied weight.

Mobile weighing is said to simplify processes and procedures and help control the quality of products and services.

Collecting the 'Archie' statuette, RAVAS UK sales manager Nicola Whittle said: "We are thrilled to have won such an important award, and at the first time of asking.We firmly believe that iForks will make a real difference to productivity and safety in materials handling worldwide, so it is great to see that the idea has captured the imagination of so many voters throughout the industry." Key features include 2,500kg capacity at a load centre point of 500mm, with both automatic and manual zero correction available. The system also has 200% overload protection. It also accommodates gross and net weighing, automatic tare and manual tare weight entry, and the adding up of multiple weighings with a sequence number.

RAVAS says the system can be set up in five minutes and uses popular wireless technology Bluetooth for communication between fork scales and truck cabin indicator. The indicator can then communicate with handheld terminals or warehouse management system via Bluetooth,Wi-Fi or RS232.

In terms of operating time, iForks will last for 180 hours and it has battery packs integrated in the forks. Operating time for the indicator is 80 hours. To conserve power, the weighing system has an auto shutoff function which switches off the electronics after a prolonged period of non-usage. The indicator features a power management menu so the user or manager can determine when the auto shutoff kicks in.