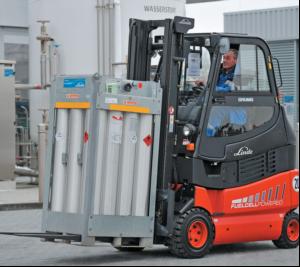 Hydrogen fuel cell powered,'zero emission' forklift trucks have been delivered by Linde Material Handling, but the trucks represent only one way the manufacturer can help customers slash energy costs

Linde Material Handling has announced that 'zero-emission' fuel cell trucks are now included as a customised option on its product range and the first deliveries have been made in Germany.

The firm has delivered two fuel cell trucks to the Linde Gases Division, taking an important step for the whole industry on the road to more intensive use of this innovative carbon-cutting technology.

"This is a major breakthrough which will help our customers reduce their carbon footprint in the long term," says Andrew Daly, sales and marketing director for Linde Material Handling in the UK.

The development is important in the strategic landscape with some business groups raising concerns about the longevity of cheap and plentiful oil. The UK Industry Taskforce on Peak Oil and Energy Security recently stated that the rising cost of oil could affect every aspect of British lives within five years. Demand from the rapidly industrialising developing world could push prices up sharply because production much above the current 85 million barrels per day level is not thought possible - or, if it is, could be much more expensive.

With rising oil prices combining with current pressure to reduce carbon emissions and costs, the development of trucks which need less fuel is economically important for industry.

The technology In place of the usual 80volt battery, the trucks have a fuel cell and a tank which stores 1.6 kilograms of hydrogen gas at 350 bar. The electricity generated from the hydrogen supplies the electric motors that drive the truck. The only waste product from the splitting of hydrogen molecules is pure water.

"In terms of performance data, the trucks are the same as the equivalent battery-powered model in the range," says Daly.

The trucks have 'supercaps' - large condensers which act as a buffer and cover performance peaks such as accelerating from standstill or lifting a load.

The absence of batteries - which need changing and charging - is said to be another advantage of these trucks. In addition, drivers require only an extra one and a half hours of training to use the new vehicles.

The first two trucks - E30 three tonne electric counterbalance models - have been tailored specifically to the customer's requirements. One of the trucks is used for transporting gas bottles between production and despatch, which involves crossing a public road. The second works in a bottle filling area.

Both trucks replace diesel models with a 3.5 tonne load capacity, which were previously used for this purpose. Refilling the fuelcell trucks is quick and safe at the Linde hydrogen filling centre pump and is therefore comparable to refuelling a conventional diesel truck, says the manufacturer.

The fuel cell trucks were developed over the last two years with Linde's long-term partner, Hydrogenics, the Canadian fuel cell manufacturer. Linde's regional dealer, Gruma Nutzfahrzeuge, based in Garching, near Munich, has been involved with the project from the beginning and is responsible for all aspects of servicing and maintaining the trucks.

"We recognise that we need to keep developing our products so that they meet both the immediate and the long-term needs of customers," adds Daly. "The delivery of these first fuel cell trucks demonstrates that, despite these difficult economic times for the industry, Linde continues to design and develop products that our customers will need in the future."

Linde has deployed the Fuel COST (Cost of Operations Savings Tool) Calculator programme to its sales team, in a bid to persuade prospective clients that Linde trucks use much less fuel than competitors.

Linde says its Cost Calculator proves that using Linde's products, with features such as hydrostatic transmission, can reduce fuel costs by almost a third as well as cut carbon emissions.

"More and more companies are appreciating the fact that the true value of a forklift truck should be based on the lifetime costs, rather than just an initial purchase price," says Daly.

"We are happy to take the COST Calculator to any potential customer and look at their particular application and requirements because we know it is almost certain that they will use less fuel with a Linde truck."
MORE FROM THIS COMPANY