Speed of aisleway movement proves as important as working in narrow aisles for 3PL Bowker as it identifies quick turnaround as a warehouse priorty. Leading 3PL Bowker Group has introduced a fleet of 12 Flexi articula 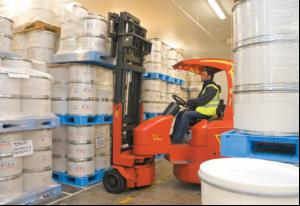 Speed of aisleway movement proves as important as working in narrow aisles for 3PL Bowker as it identifies quick turnaround as a warehouse priorty.

Leading 3PL Bowker Group has introduced a fleet of 12 Flexi articulated forklift trucks from Narrow Aisle. Five Flexis are in service at both the Leyland and Preston facilities, with a further two trucks working at the Hull site.

Throughout the business Bowker has standardised on narrow aisle widths with some block stacking capacity at each of its facilities.

Although the Flexis can operate in aisles as narrow 1.8m wide, Bowker chose to set the aisle widths at 2m because it was felt that the extra space would allow the most efficient speed of throughput.

"A significant part of our business is about achieving a quick turnaround," explains warehouse manager, Stuart Greenwood. "Quite simply, we felt that by narrowing the aisleways too much we would restrict the speed at which the forklifts can travel between picking locations." While articulated forklift suppliers have stressed the benefits of keeping aisle widths to a minimum for many years John Maguire, sales and marketing director at Narrow Aisle, believes that some companies are in danger of adversely affecting the efficiency and productivity of their forklift fleet by attempting to squeeze too many racking runs into any given storage cube.

"At fast-moving operations like Bowker where speed of pallet putaway and pick is essential, the speed at which a truck can safely operate in the aisleways is more important than the need to narrow the aisleways," he says.

"I think that this is sometimes forgotten at the warehouse planning stage. For example, I recently visited a site where the wide chassis articulated trucks specified in the operation have no choice but to travel at less than half of their top speed within the aisles because clearance each side was too small so there is very little margin for error on either side of the truck.

This is clearly counter productive to any benefits the user may have derived by being able to add extra pallet positions by cutting the aisle dimensions." Bowker's Flexi fleet comprises G4 models from the Narrow Aisle range.

An electric-powered truck, the Flexi G4 is powered by a heavy duty battery for long shift working.
MORE FROM THIS COMPANY