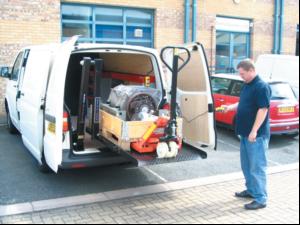 Recycling equipment manufacturer, Tomra Systems, has installed a bespoke version of the Penny Hydraulics Load Lift inside its latest VW Transporter service vehicles to transport palletised specialist components without the need for manual handling. In addition to simplifying the handling of heavy and valuable equipment, the Load Lift allows a single engineer to carry out maintenance tasks where two or more people were previously required.

"We have safer and better working practices," says David Saul, project manager at Tomra Systems. "We are also able to send one engineer and one set of tools to each job which is more efficient and productive. But the payback we have achieved is incidental because above all else I wanted our engineers to be safe." Tomra designs and manufactures sophisticated automated waste sortation and processing equipment.

The replacement of cutting heads is one of the tasks that service engineers must be complete from time to time. Cutting heads and other large components are crated and palletised for transportation.

Each load weighs many tens of kilograms and is too heavy to be lifted safely and within existing manual handling guidelines by a single person.

The Load Lift is a light and compact platform lift for loads up to 300kg that offers a safe, reliable and economical way of handling loads.

Its design allows it to be installed inside the rear doors of the van without restricting access to the load area or affecting alternative carrying solutions. Self-contained hydraulic systems ensure smooth, precise and assured operation while simple push button controls, automatic battery isolation and overload protection promote ease of use and safety.

Tomra had already chosen the VW Transporter T28/130 as its new service engineer vehicle because it offered a combination of load space and performance. This is probably the smallest vehicle in which a Load Lift has been installed and early on in the design process it was clear that the standard model would not offer the optimum performance for this particular application. The concept was to lift the pallet truck and crate into the vehicle, but when these were mounted centrally on the conventional platform there was potential for load to catch on the rear bumper and door frame of the vehicle as the combination was loaded.

The solution devised by Penny Hydraulics was a longer platform that allows the hand pallet truck and Europallet to be positioned at its rear for the initial part of the lift and then pushed forward slightly before the load enters the vehicle to avoid any potential overhang problems. Small recesses towards the rear and centre of the platform engage the back wheels of the pallet truck safely in the correct position for each stage of the lifting process. Once the load is inside the vehicle it can be secured in position on the platform with conventional stowing straps. The platform's rear section is then folded up to create an additional barrier between the load and vehicle doors for extra safety during transportation.

"This is a simple but clever solution to our requirement and it works really well," says Saul. "The platform folds out of the way when we're not using it which means we get most of the load space back for general use when we need it." Penny Hydraulics checked the loadings for the modified units during the design and manufacture stage. It then completed the installation at is factory and provided user training to Tomra's engineering team. The first unit was tested in the field by Tomra before it decided to specify another for a second identical service vehicle. The way the unit has been designed and installed ensures that the load is placed in front of the rear axle and this promotes better weight distribution, which in turn helps with vehicle handling. The entire project was completed to very tight deadlines to ensure both vehicles were operational within a couple of weeks.
MORE FROM THIS COMPANY
Send Enquiry
View Company Profile
RELATED ARTICLES