Ecocleen, part of the Servest Group is celebrating its prestigious contract with Tesco Distribution that has now grown to cover 12 sites. In January 2008 Ecocleen began by cleaning just two of the large, demanding distr 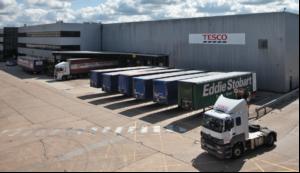 Ecocleen, part of the Servest Group is celebrating its prestigious contract with Tesco Distribution that has now grown to cover 12 sites. In January 2008 Ecocleen began by cleaning just two of the large, demanding distribution centres.

The 650,000ft2 Fenny Lock site in Milton Keynes is a prime example.

Operating 24/7, this site alone processes over 25,000 inbound pallets a week and dispatches in excess of 38,000 roll cages to eight other depots. Almost 800 members of staff are employed at the facility.

Ecocleen operates with a team of nearly 90 staff, spread over three shifts every day with an intensive deep clean programme scheduled for Saturday and Sunday.

So what is making the Servest Group so successful in this difficult sector? Paul Middleton, MD of Servest Retail and Leisure says: "When we started our first Tesco Distribution Centre, it was an incredibly difficult and steep learning curve. I believe our success is due to a stable and long term operations management team. Key managers have a stake in our business and therefore a vested interest in our success and subsequent growth." Ecocleen was subject to a management buyout in 2003 and went on to acquire the Sherwood Group in 2008. Both entities are now rebranded under the South African based Servest Group that employs more than 30,000 people worldwide.

Middleton adds: "I believe we have been successful with Tesco because of our level of commitment to service.

If we don't know, we will ask - honest and fact based. Lots of suppliers talk but don't deliver, Servest share a common vision with the client - a first class distribution centre."
MORE FROM THIS COMPANY
Send Enquiry
View Company Profile
RELATED ARTICLES