Pyroban's Malcolm Davis claims some businesses could be over specifying their forklift 'EX' safety needs and spending unnecessarily When the European 99/92/EC directive, often referred to as the "ATEX 137 Safety of W 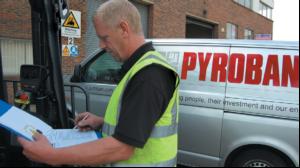 When the European 99/92/EC directive, often referred to as the "ATEX 137 Safety of Workers" directive was introduced back in 2000 the primary objective was for businesses that processed and stored flammable materials to prevent the formation of potentially explosive atmospheres.

The introduction of the directive led to many companies reviewing their sites from a top level and wherever possible eliminating or limiting, as far as possible, areas classified as Zone 1 and Zone 21. However, the opportunity to reassess and reclassify areas was passed over by others so by the 1 July 2006, when the full transition period had been completed, some sites had experienced little or no change.

Ten years after the introduction of the ATEX "Safety of Workers" directive it surprises me that so many companies continue to specify Zone 1 rated forklift trucks. A Zone 1 area is an area where an explosive atmosphere is likely to occur in normal operation occasionally so it makes sense to confine such areas to the minimum. It is highly unlikely that any process building contains only Zone 1 areas as such areas are usually limited to a distance of up to 2m from the source of release, although this will vary depending upon a liquids flammability level, vapour density and flashpoint.

Small, very confined areas around processing equipment may be considered Zone 1 areas. Extending from this point will be Zone 2 areas and as you move further from the point of release they would be classified as safe areas. Therefore in practice it is a small percentage of trucks that actually work within genuine Zone 1 areas and these tend to be pedestrian pallet or ride-on trucks and pedestrian or ride-on stackers. Counterbalance trucks may enter process buildings but their size and limited mobility mean that any application within the Zone 1 areas is usually strictly limited. Diesel trucks would rarely be used. For use in Zone 2 areas Diesel and electric counterbalance trucks are used to unload raw materials from lorries, to feed materials into process and storage buildings and to load finished goods ready for distribution. Reach trucks,VNA trucks and Order Pickers are normally limited to the warehouse where sealed containers of raw materials and finished goods are stored. If the materials are flammable then all of these trucks would normally be rated for use in Zone 2 areas, being "a place where an explosive atmosphere is not likely to occur in normal operation but if it does occur will persist for a short period only".

Under the ATEX Directives, businesses handling flammable material should do everything possible to "prevent the formation of an explosive atmosphere in the workplace". Our Ex-Solutions consulting team has worked with companies to help them take another look at their risks and match their Ex equipment accordingly. Of course Zone 1 areas will still exist, but they should be smaller and fewer, leading to decreased demand for zone 1 rated forklift trucks.

The difference between the cost of a Zone 1 and Zone 2 explosion proof system can sometimes be as much as 100%.

Added to this the additional cost for servicing Zone 1 rated trucks means that any company specifying Zone 1 rated equipment for typical Zone 2 applications is paying a high and unnecessary premium at a time when business is striving to build a lean and competitive operation.

During a time of economic uncertainty, it is important that businesses do not over-specify equipment just because it is what they have always done. The ATEX Directives were designed to improve the safety of workers. Reducing the number and extent of Zone 1 areas gives businesses the opportunity to significantly reduce cost.

Reducing risk and cost can be achieved with a system that tells truck operators when their operating area is safe and automatically shuts down their truck before the area becomes explosive.We would ask - it time to look again at any Zone 1 rated trucks working on your site?

Summary of legislation There are two ATEX directives. Directive 99/92/EC (also known as ATEX 137 or the ATEX Workplace Directive) relates to the user of the equipment and governs minimum requirements for improving the safety and health protection of workers potentially at risk from explosive atmospheres.

Directive 94/9/EC (also known as ATEX 95 or the ATEX Equipment Directive) relates to manufacturers and covers equipment and protective systems intended for use in potentially explosive atmospheres.