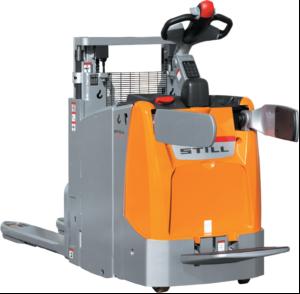 Still has released a new modular family of warehouse trucks
for loads up to 2000kg. The range comprises the EXU-SF
low lift truck for horizontal transport and the EXD and
EXD-SF (pictured) double-decker trucks.

The trucks have been optimised to deal with the flow of
material when loading or unloading lorries, in goods received, in
despatch, in the warehouse and when supplying production.

The low lift truck EXU-SF and the EXD-SF double-decker
truck were specifically developed for the
mixed short and medium distance
transport of goods in the distribution
zone of warehouses. This is where agility
and high turnaround speeds count.

With a frame width of 720mm they
can enter into any block storage aisle.

The EXU-SF is available with fork
lengths up to 2390mm allowing it to
pick up three pallets crosswise at a
time.

The trucks can be individually
adapted. For example, to match
different applications two battery sizes
are available: 24 Volt/240 Ah or 360
Ah. The batteries can be changed by
hoist or, optionally, over the side of
the truck.

New type of
tiller
A new feature is the
combi-tiller for fast, efficient and
safe handling of loads. The upper part of
the tiller is angled and can be folded to extend
the tiller if necessary. This allows the driver to work at a safe
distance from the truck at all times whether the platform is
folded up or down.

For pedestrian operation in confined spaces the tiller remains
folded up. If the operator extends the tiller, the travelling speed is
increased from 4 to 6 km/h.

For high turnover performance on longer distances, the
operator simply folds down the platform and the side wings and
can travel to the destination at a speed of up to 9 km/h. The
foldable side wings with large, sturdy upholstering safely hold the
driver on the platform, also when cornering sharply. The driver
can adjust the side wings individually to the height of his hips.

All SF trucks are fitted with a stand-on platform for the driver.

The dampening element is patented and allows to adjust the
suspension individually to the weight of the driver. This protects
the driver against vibrations and shocks caused by bumps in the
road surface. The body vibration value is 0.59m/sÃ‡ which is
approximately 40% better than the average on the market,
according to Still. For pedestrian operation in narrow areas of
the warehouse, the stand-on platform can be folded away and is
then completely integrated into the contour of the truck so that
it cannot be damaged.

When cornering, the truck reduces the travelling speed
according to the steering angle (Curve Speed Control).

Depending on the requirement, the driving modes ECO or
BOOST set the truck to use little energy to provide high
performance. A stop function prevents the truck from rolling
back on ramps (ramp stop).

Double deck performance
The double-deck operation is designed to increase efficiency,
especially when handling goods that cannot be stacked such as
pallets of yogurt. This way the volume of lorries
can be better used.

The EXD is especially suitable for
operation on short distances, for
example, when loading or unloading
lorries or vans. The EXD travels at a
maximum speed of 6km/h. The width of the
working aisle is 2.1m. For longer distances with
high turnaround speed the EXD-SF with a
stand-on platform handles the
transport jobs best.

The double-decker
truck EXD-SF lifts
pallets up to a
nominal lift of
2924mm. The hydraulic system
of the EXD-SF is fully
proportional allowing sensitive
lift and lowering. The mast was
optimised for a good visibility of
the fork tips.

On demand these trucks are
available with a scanner
terminal to optimise
the flow of material
which will help to increase
the overall turnover of goods in
the warehouse.

In addition, a FleetManager light version with a
crash recorder is available for the EXU-SF and the EXD-SF.

The optional Digi-Code in the tiller allows access control with
10 different four-digit pincodes.
MORE FROM THIS COMPANY