The materials handling industry is beginning to shrug off the effects of the global recession, according to lift truck manufacturer Jungheinrich. 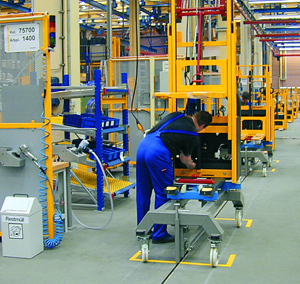 The materials handling industry is beginning to shrug off the effects of the global recession.

According to figures recently released by Jungheinrich Group, worldwide demand for handling equipment was up 45 per cent in the first quarter of 2010 compared to the same period a year earlier. Asia recorded the strongest rise, advancing by 86%.

Jungheinrich expects the recovery to continue and projects that the world market for forklift trucks will reach in excess of 650,000 units in 2010 - a year-on-year increase of 20 per cent.

Jungheinrich Group's incoming orders grew in the first quarter of 2010 to reach 433 million Euros. Increased revenue from after-sales service was a major contributor to the Group's success.

The Group expects to achieve net sales of 1.7 billion Euros and an operating profit in the double digit Million Euros for the current financial year.
MORE FROM THIS COMPANY