Industry representatives have hammered home the importance of fuel duty reform in a meeting with the Treasury. 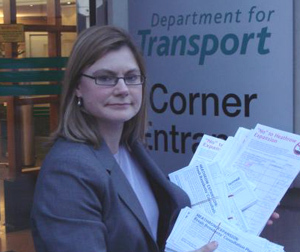 Industry representatives have hammered home the importance of fuel duty reform in a meeting with the Treasury.

With an enormous budget deficit to plug and tax revenues falling elsewhere as a result of the recession, there is a real risk that fuel duty will continue to be an easy target for policy makers.

The FTA made the case that as long as a single level of diesel duty for all road users is applied, the Treasury should resist the temptation to maintain a policy of above inflation increases in duty or risk putting the struggling sector under even greater strain.

â€œJustine Greening was receptive to our criticism of the fuel tax policy which has done such irreparable damage to the sector, and the economy at large, and responded well to our views on lorry road user charging, fuel tax and decoupling diesel duty for HGVs,â€ said de Pencier.

Last year, the FTA won the support of more than 120 MPs during its Every Penny Counts campaign to protest against above inflation fuel duty rises.

The FTA also welcomed the Government's commitment to consider lorry road user charging and estimates the current 'bring your own fuel policy' represents a loss to the Treasury of over £200 million every year.

â€œA road charge could bring real benefits to the Treasury and the logistics sector, but industry needs to be involved heavily in its development from the outset. We are, of course, in favour of seeing foreign trucks pay their way, but we will be pressing the Department for Transport for more details on how this can be achieved equitably for UK hauliers,â€ added de Pencier.

â€œTo get the most out of a potential lorry road user scheme, engagement with industry is not only recommended but essential to securing a solution that delivers the greatest benefits.Â We look forward to working toward such a solution with the Treasury and the transport ministers in due course.â€
MORE FROM THIS COMPANY