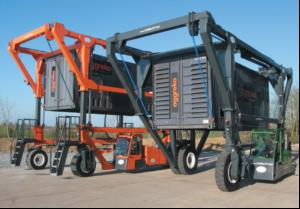 The Straddle Carrier has been developed by Combilift in a bid to create a cost effective and flexible container handling solution for distribution, shipping and haulage companies which even have relatively low throughput levels.

The firm says it is a much more economical option than using conventional container handling forklifts, reach stackers or mobile cranes, and offers independence when moving containers and similarly oversized products around a site. If an operation handles six containers a week the return on investment in a Straddle Carrier is quickly achieved, says the manufacturer.

This design ensures maximum stability with all 3 wheels permanently in ground contact even on rougher surfaces without the need to add suspension, making it more economical to manufacture and enabling cost savings to be passed on to the end user.

Although the appearance of the Straddle Carrier is quite different to the Combilift standard 4-way models, many of the features, for example the hydrostatic drive and the hydraulic steering, have been designed around common components.

The firm adds: "This thought-through approach will enable the existing Combilift dealer network around the world to support the product when it comes to after sales care and maintenance. The design of the 3-wheel model enables it to be disassembled and shipped in just one 40' container, reducing freight costs."

Straddle Carrier in action Temporary power and temperature control solutions provider Aggreko is the first company to take delivery of the newly developed product, for its factory in Dumbarton, Scotland.

The Straddle Carrier is said to enable it to make vast cost savings on the handling of the large number of generators and container units produced at the site.

After making an initial enquiry regarding better handling procedures for generator engines in the pre production storage facility, Aggreko turned its attention to the more pressing issue of ensuring the efficient movement of finished generators due to a planned move to a new site in 2011. Aggreko conferred with Combilfit and its local distributor Douglas Gillespie Plant.

DGP's Brian Docherty explains: "With lengths of 20 to 40 feet, the dimensions of generators are comparable to containers.

I was aware of product development at Combilift involving container handling which led us to the Straddle Carrier." Aggreko project coordinator Derek Neilson adds: "Two major factors in the choice of new handling equipment were cost and the weight of any machine capable of carrying 25t loads.

"Our previous system was based on cranes and trailers, and hire costs for these have been extremely high. Any conventional reach stacker up to our requirements has an unladen weight of around 70t, and the loading on each wheel would have meant spending considerable sums on reinforcing the floor in the new premises. As the Combilift Straddle Carrier is around four times lighter than a reach stacker, the ground pressure is greatly reduced even when it is used to carry two generators to its full capacity of 35t." As Aggreko needed to double stack generators from the ground up, its initial option is a four-wheel, diesel powered model (LPG power is also available) and the company will also be leasing a second three-wheel machine and is looking to purchase a further four-wheel before moving to new premises.

With 115 units moved on a weekly basis its speedy operation is of considerable benefit ? taking a unit from the production plant and loading it for dispatch takes less than three minutes - three times faster than the crane / trailer combination.
MORE FROM THIS COMPANY