More than belts and bits

Conveyors are not simply about belts and metal,how they interface with people and other technology is key to efficiency, says Craig Rollason, head of sales & marketing for Knapp UK Today's conveyor systems are highly 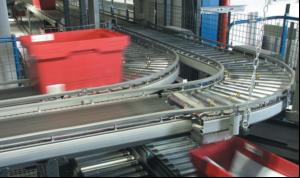 Conveyors are not simply about belts and metal,how they interface with people and other technology is key to efficiency, says Craig Rollason, head of sales & marketing for Knapp UK

Today's conveyor systems are highly sophisticated and - rather than being simply a productivity-enhancing and labour-reducing add-on - they often form the very heart of the logistics solution for pallet- and tote-handling distribution centres.

Of course, conveyor technology has improved in many respects - speed, noise, safety and maintainability, to name but a few. But the most significant change since the early days has to be in terms of functionality. Conveyors do so much more than merely transport goods now: they often help to sort goods, form a key part of the order picking function and interface with operators, as well as with many other technologies.

Hello operator Perhaps the most significant advances in conveyor technology in recent years have surrounded the interfaces with operators. Even in distribution centres that are almost totally automated, there is still a need to interact effectively with humans. In reality, most logistics operations have at least some product lines that are not suited to fully automated fulfilment and require manual or semiautomatic picking.

Many automated handling system suppliers have grasped the nettle of ergonomics and now appreciate the significant role this issue plays in human productivity, especially when it comes to the kind of repetitive tasks that are typical in the modern warehouse.

Good ergonomic design not only increases productivity through reduced fatigue levels and higher morale, but also means that employees are less likely to be absent through illness. At Knapp, for example, our product development engineers have incorporated a number of ergonomic features into our conveyorbased order picking stations. These include items that enhance operators' physical wellbeing - such as placing anti-fatigue mats on hard floors, and the use of padded fascia panels in the area immediately around the operator - and also factors that improve emotional wellbeing, such as the replacement of cold-to-touch metal components with attractive wooden ones.

The state-of-the-art operator workstation for Knapp's OSR Shuttle storage and picking system, for example, has achieved certification by the renowned TÃœV Rheinland.

Getting GUI Interfaces with operators are not limited to hardware, however.

Conveyor systems also need to work effectively with other kinds of technology. Today's material handling systems make increasing use of robotic systems, either as part of the manufacturing process - such as in automotive production - or as part of packing and dispatch operations. Robotic palletisers are an increasingly common sight in UK distribution centres.

Conveyor systems need to be intelligently designed to optimise these interfaces, particularly in terms of material flow rates, so that bottlenecks are avoided.

The other area in which conveyor technology has made great strides since the early days is serviceability.With the focus of the industry shifting to lifetime costs, conveyor manufacturers have taken significant steps to improve the ease with which their systems can be maintained. Cables and key components are easily accessible to make repair or replacement as rapid as possible. The number of different parts used in a conveyor system is also minimised to simplify maintenance and reduce the need for spare parts stockholding - for Knapp, this is a key part of our 'Low Complexity Warehouse' concept.

Conveyors have come a long way in the last few decades. It will be fascinating to see where technology takes them next.
MORE FROM THIS COMPANY