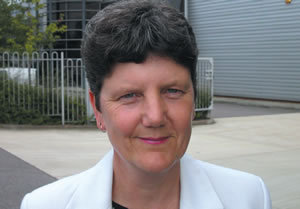 The online dimension has already revolutionised the retail sector and its logistics but a second revolution is on the way. According to analysis from global financial services firm Morgan Stanley, the number of mobile users accessing the internet will outstrip desktop users by 2014.

This is predicted to bring an increasing emphasis on mCommerce, which in turn is expected to increase consumer expectations of fast delivery of goods, placing further strain on supply chains. Indeed, according to a Forrester Research study in the US, 74 per cent of online retailers either already have or are developing a mobile strategy.

Speaking at the recent SSI Schaefer Automation for eLogistics conference, Kirsten Tisdale (pictured), consultant at Aricia said: â€œIt will be now, now, now, people are getting less prepared to wait. From a supply chain prespective what is key about mCommerce is that you can't 'pr it'. You can either do it or you can't.â€

A key message from the conference was that logistics managers whose companies are going into e&m commerce must be aware of best practice and be willing to push boundaries to give themselves a competitive edge.

â€œMy advice is to get started,â€ Tisdale added. â€œYou will make mistakes but will learn the lessons you need to learn.â€

Tisdale said: â€œIntegration is something to be aspired to but only on the basis that it works. You can't have any weak links and cannot compromise the e&m tail supply chain with the less sophisticated retail side of things.â€

Other key impacts on logistics include peaking, with Mondays key, including 'Mega Mondays' before Christmas which can see volume eight times above normal. Also, with 18% of items returned, effective policies must be created here. Delivery failure is also an issue. The IMRG report Valuing Home Delivery, put the costs of home delivery failure at greater than £1 billion.

The report says the cost of delivery failure is almost a three-way split among carriers/logistics providers, consumers and retailers, with inefficiencies adding £1.45 in total costs for each transaction eCommerce solutions provider Snow Valley also reports in its research that retailers are pushing back the cut off times for accepting orders for next day delivery and predicts these will continue to get later, creating ever more stiff challenges for the warehouse.

Indeed SSI Schaefer has warned that online retailers may soon hit a ceiling in terms of what automation technology can do to allow them to make increasingly competitive deliveries.

Director Jaap Vos said: â€œRetailers are driving the online market by looking for competitive advantage. Fast deliveries and extra features are key to this.

â€œBut this will eventually stop as retailers will hit a ceiling in terms of what can done by automation. For example, if a retailer wants to gift wrap or iron shirts before despatch - you just can't automate that.â€

Vos added that retailers would then have to look at other factors such as reliability to differentiate their service.
MORE FROM THIS COMPANY