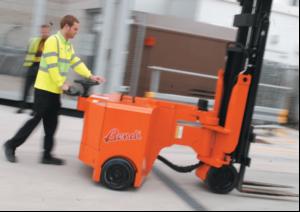 Translift Bendi has released a VNA pedestrian-controlled articulated forklift truck. The Mini Bendi BP312 is said to offer superior levels of safety, and functionality previously considered unattainable in the warehousing and logistics sector.

Bendi adds that it expects the new truck to challenge existing thinking.

"There is a very real need for a smaller, lighter machine that is not required to have the speed or the reach of a normal Bendi but can still accommodate the UK-style perimeter based pallets," explains Bendi managing director Simon Brown.

"The traditional equipment offerings range from pedestrian counterbalance, pedestrian reach and a variety of other ride-on options, all of which require 2.5-3m aisle, which often represents over 70% of these smaller warehouses." The standard 220 degree load rotation of the Mini Bendi is said to give operators unrivalled, unobstructed visibility of the forks and load at all times offering a much safer operation than conventional solutions.

The operator's position, twice as far away from the pallet compared to a traditional pedestrian truck and intuitive feedback from the truck's steering system enables pallets, including Euro style and UK perimeter based (Chep) variations, to be nimbly and safely placed.

The large, soft wheels of the Mini Bendi allow safe travel over yards or roads, enabling deliveries to be easily unloaded and placed straight into storage. Traditional machines in this sector with smaller wheels can struggle with these surfaces and either get stuck or spill their loads.

The firm adds that trials and subsequent modifications have been completed and that the Mini Bendi has been well received, particularly by leading lights in the retail industry. Orders for more than 65 trucks have already been placed.

"The dynamics of the Mini Bendi are such that we knew it would be incredibly popular," continues Brown. "Its versatility and intuitive handling, coupled with health and safety improvements, means it is likely to be a firm favourite in the Bendi portfolio." Translift Bendi is set to formally launch the Mini Bendi at IMHX in November. Four other new machines are also scheduled to be unveiled which will bring the total Bendi product range to 17.

"We aim to launch five new machines at the show and, as you can imagine, it is a very exciting time for us. Each one is a radical departure from where we are now and, without giving too much away, three of the new trucks will open up new market sectors to us including food and retail, in addition to opportunities in European markets - all of these have great potential in terms of additional volume and income streams for Bendi," adds Brown.

"One product in particular, which is currently out on test, has already produced an order for 50 machines with another sizeable order possible, subject to further trials. Our intention is to secure the patent for the European truck prior to the show. This truck offers users 1.8m aisles and a whole host of other unique features, for a European machine at 50% of the present cost.

These new additions reflect our focus on innovation and determination not only to provide solutions for customers but to base our development on customer feedback in tandem with substantial investment and research," he concludes.
MORE FROM THIS COMPANY