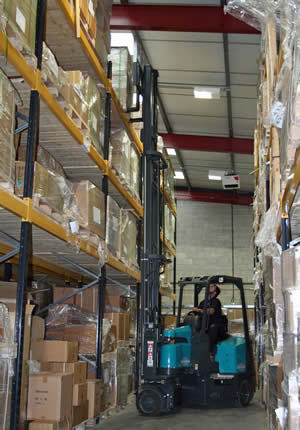 Vado supplies high quality taps, showers, accessories and fittings to a global customer base ranging from luxury hotel chains to contractors. Due to impressive year on year growth the company recently acquired extra warehousing space, and
Operations Manager Gordon Williams was naturally keen to exploit the full potential of the 45,000 ft sq facility. The first Aisle-Master was delivered earlier in the year, and it was such a boost to operations that a second truck is now in operation.

With the articulated system Vado has been able to install racking to accommodate 1,200 pallet spaces, whereas the wider aisles needed for counterbalance operation would have yielded just 580 spaces. Gordon comments: â€œThe Aisle-Masters have a track record of long life and reliable operation and as we are saving £18,500 a year on previous 3PL costs, payback will be achieved in less than two years - this has been an excellent investment. As the trucks are fully manufactured in Monaghan we were able to get them in Vado's corporate colours which was an added bonus.â€

Vado's 20SE AC electric Aisle-Master models work mainly inside in aisle-widths of 2m and lift to 5.5m. Equipped with super elastic tyres, they can also be used in the yard. The advantages of AC technology (incorporated as standard in all electric Aisle-Masters) include smoother operation of controls, brush free motors for less wear and tear of components and lower maintenance as well as more efficient battery charging.