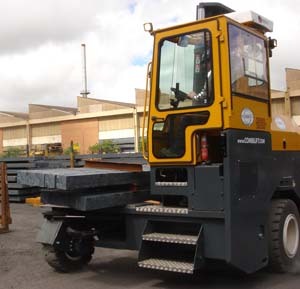 The announcement was made during a recent Enterprise Ireland trade mission to Brazil, aimed at helping Irish companies win new business and increase export sales in this vast market.

A key factor in securing the contract was Combilift's proven ability to customise its products and thereby meet Gerdau's strict requirements for safety, operator comfort and operational productivity.

â€œWinning this business with Gerdau is hugely significant for Combilift both in its own right and also for positioning the company to further extend its reach into the wider Latin American market,â€œ said MD Martin McVicar.

â€œOur customised approach to manufacturing has enabled us to sell 14,000 units in 50 countries to date, and we now look forward to increasing our presence in the Brazilian market.â€

Since Combilift introduced its first 4 tonne model when the company was established it has continuously developed and increased the capacity of its range. Gerdau's trucks, fitted with John Deere engines, have lift capacities of 16 t which will enable them to cope easily with manoeuvring long and heavy product from the production facility to outside storage areas.

Due to the potentially very high temperatures both inside the manufacturing area and outside, air conditioning units have also been incorporated in the cabs to provide a more comfortable working environment for operators.

The first of the four trucks is already in operation, with the remainder of the order due to be delivered shortly. Combilift works together with its dealership in Brazil, Saur Equipamentos S.A., and Gerdau will rent the Combilifts through its material handling equipment rental partners Parana Equipamentos and Tradimaq.
MORE FROM THIS COMPANY