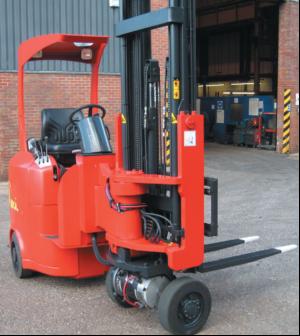 The new model, which can lift pallets to heights of up to 7.9 metres, is supplied as standard with treaded cushion rubber tyres for maximum traction in wet outdoor conditions, while twin front wheel drive means that the weight of the truck and the load is evenly divided between the front two tyres to enhance traction and minimise tyre wear.

At the heart of the truck is a compact axle design which, combined with the Flexi VNA's ability to truly articulate through 220 degrees, allows easy stacking in 1600mm aisleways.

Instead of 'pivot' steering the Flexi VNA's 'true articulation' turning system means that the Flexi VNA trucks require minimal manoeuvring in the aisleways. This, in turn, results in faster pallet put-away and picking. In a 1600mm wide aisle the Flexi VNA needs only one articulation to put-away a standard ISO (or Chep-style) pallet.

John Maguire, sales and marketing director of Flexi Narrow Aisle, says: "Some articulated trucks require the operator to perform a five-point turn in the aisleway before a pallet can be put-away or picked. The Flexi VNA , with its 'True Radius' design requires one turn to enter or de-stack a pallet.

"This is hugely significant and results in very significant time savings. In any application involving articulated trucks the amount of time spent in the aisleway picking and putting away pallets has to be minimised if optimum operational efficiencies are to be achieved.

"We believe that with its True Radius articulation principle, the Flexi VNA can reduce the amount of movements that an operator has to make in the aisle during the stacking and destacking cycle by half." The use of high quality components - sourced mainly from Europe - is one of the reasons why the Flexi range has always enjoyed an excellent reputation for long term reliability and low lifetime cost of ownership, says the company. Furthermore, because spare parts are available at very reasonable cost, the residual value of a used Flexi is consistently high.

Taking the HiLOAD Flexi Narrow Aisle has also announced the addition of the Flexi HiLOAD, which is designed to handle heavy loads in very narrow aisle storage schemes. Flexi Narrow Aisle expects the new truck will be of particular interest to companies operating in the manufacturing, building materials, engineering and food ingredients sectors.

The new model is offered in a choice of 1250mm and 1350mm chassis widths and, thanks to its unique heavy duty vision tilting lift mast design, the Flexi HiLOAD can lift loads of 2.5 tonnes to heights of 9.5 metres.

The electric-powered Flexi HiLOAD incorporates AC technology to ensure optimum battery efficiency and minimal maintenance costs. The truck is also supplied with a high capacity battery that lets the Flexi HiLOAD maximise time between recharges which, in turn, means that even over the longest shifts the HiLOAD maintains the highest standards of performance.

Like other models in the Flexi Narrow Aisle range, the Flexi HiLOAD requires minimal manoeuvring in the aisleways.

Maximum 'over rotation' and smooth digital encoder steering combine to ensure that one turn is all that is required to enter or de-stack a pallet which results in the fastest operational throughout and efficiency.

As well as the ability to work in the narrowest aisles, the Flexi HiLOAD can be used like a counterbalanced machine - both inside and outside. This dual purpose functionality guarantees the user a wide range of benefits - not the least of which is the ability to load and unload lorries and deliver pallets directly into the racking in a single operation. By doing so, it increases efficiency and productivity while abolishing double handling and the costs associated with operating a bigger truck fleet than is necessary.

"The HiLOAD has been developed for heavy duty applications where customers want to save space and increase pallet throughput," says Maguire. "Bulk foodstuffs, raw materials and part processed products are often heavier than the typical load in, say, the retail sector. The HiLOAD will be welcomed in industries where high pallet weights are common."
MORE FROM THIS COMPANY