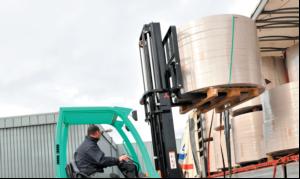 Abrilliant new development on the Mitsubishi GRENDIA offers fork truck drivers outstanding protection and unprecedented visibility. This has resulted in it being awarded Pick of the Year status in the Fork Lift Truck Association Awards for Excellence 2011.

Traditionally, operators have been protected from falling objects by metal bars in the roof of the overhead guard.

However, although these structures form an effective barrier to larger objects, they do little to stop smaller items - and also present a serious obstacle to operator visibility.

Over the years, some companies have tried to tackle this, but have not managed to really make a difference.

However, employing a specially developed polycarbonate, which is generally around 250 stronger than glass or 30 times that of Acrylic glass (PMMA) Mitsubishi has achieved real success.

The revolutionary design offers operators a wholly unobstructed view while providing unprecedented protection against falling objects, including items as small as screws and bolts.

Overhead guard roof The Mitsubishi hi-vis overhead guard roof is part of the VersaCab range of panel cabin options that was introduced with the new Mitsubishi GRENDIA family of 1.5 to 5.5 tonne IC engine counterbalance trucks. It is available on its own, or in combination with other panels.

Thanks to exceptional design and engineering, the manufacturer's comprehensive product range has an almost legendary reputation for reliability, reflected in its unique five year warranty. Through it, customers throughout the UK benefit from a enjoy cover on every major component - eliminating unplanned bills and guaranteeing peace of mind.

Designed to be as dependable as a Mitsubishi truck itself, this warranty stays with a truck - even if it's re-sold - which helps to maximise the machine's second-hand value.

"When we develop new products, our design teams consider every aspect of operator safety," says Mitsubishi Forklift Trucks general manager Mike Jones. "Being included by the Fork Lift Truck Association in their 'Pick of the Year' list further underlines our commitment to raising safety standards within the fork lift truck industry - which is what this annual honour is all about."
MORE FROM THIS COMPANY