It's good to talk...for Faber 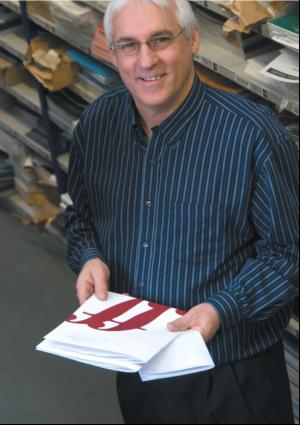 The result of this investment has helped Faber Music create a highly successful multichannel business which today sells over 120,000 music publications globally through music and book retailers, online booksellers (such as Amazon) and direct to end users with its online music bookstore, fabermusicstore.com.

John Hepworth (picctured), md of Faber Music Distribution says: "Without using voice we could not have adapted so easily to suit the different order profiles required for multichannel sales without significantly increasing our costs. Switching to voice has created a much leaner operation ready for further growth as the economy improves." In 2005 Faber doubled in size and as a result, the firm took on more staff and costs spiralled. Hepworth undertook an efficiency exercise and procured the voice solution. Payback was anticipated in 18 months but delivered in 13 months.

The installation allowed Faber to cut head count by half while improving throughput by 25-30%. It has also virtually eliminated any picking errors, which means the right goods are reaching customers more quickly and for less cost. Returns have reduced from .07% to 0.007%.

New staff take 20 minutes to train on the device, as the system gets accustomed to their voice.

Wave picking Following the implementation, a single picker can complete up to 150 order lines per hour compared with a previous hourly average of 50 to 70 order lines using the old paper based system.

Additionally, pickers now also have the capability to simultaneously pick 18 orders at a time (wave picking), which is essential for a profitable e-commerce business.

Faber needed to overcome a number of challenges when implementing its voice picking system, which was adapted by Zetes for its complex business processes. Orders were required to be split into three parts to cater for three different scenarios: general stock orders, bulk picking and a digital printing for items that are only manufactured on demand.

From the outset, the warehouse operators were involved in the project and have been enthusiastic about the new picking system, which has been customised to identify order lines according to specific format and thus helps avoid ambiguities. For instance, the system was adapted to specify 'copy' for printed music and 'CD', 'DVD' or 'Set' for orchestral sets. The system also switches from descriptive identifiers, such as the abbreviated title for the majority of mainstream and English language publications, to item number identifiers, used for foreign language publications and international composers that are not easy to identify in English.

"The warehouse staff really like the new system and they were very keen to start using it," says Hepworth. "It is human nature to avoid change and at the start we had a few within the team who were quite apprehensive. However, once they started working with voice, all their concerns were allayed straight away and have said they wouldn't want to go back to a paper based system.

"Now we are thinking - what else can voice do? We are looking at our stock taking and replenishment processes, for example, to see if efficiencies can be made there." Many companies have implemented voice picking but Faber Music's system is innovative and noteworthy for two reasons, argues Simon Jones, sales manager at Zetes.

"First, Faber has proved it is a viable option for a warehouse with less than 10 pickers, since previously voice technology had only been adopted by much larger businesses. Secondly, they have clearly shown how voice can create a more adaptable warehouse for a multichannel business model."

Faber has been given a special Warehouse Innovation Award by Zetes for Outstanding Business Improvement, due to the installation. Faber md John Hepworth says staff were thrilled to be recognised for their hard work calling the award "a huge pat on the back for everyone in the team".
MORE FROM THIS COMPANY