Blue chip companies such as Kimberly-Clark,Coca Cola and Marks and Spencer have all recognised the importance of safety in protecting their brand's integrity and installed A-Safe barriers as their safety systems of choice 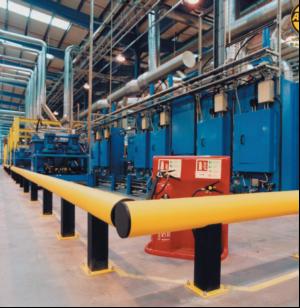 Blue chip companies such as Kimberly-Clark,Coca Cola and Marks and Spencer have all recognised the importance of safety in protecting their brand's integrity and installed A-Safe barriers as their safety systems of choice

The innovative safety barrier specialist A-Safe, based in Halifax is working alongside architects, engineers and construction companies to ensure that its end user clients, manufacturers and businesses of all kinds, get the best possible safety advice in protecting valued staff and their valuable buildings and plant.

Blue chip companies such as Kimberly-Clark, Coca Cola and Marks and Spencer have all recognised the importance of safety in protecting their brand's integrity and installed A-Safe barriers as their safety systems of choice, either for new build projects or the replacement of outdated and expensive to maintain steel.

Kimberly-Clark appreciates the fact that their people are the most precious asset, but buildings, plant and machinery come a close second. Stewart Leary, safety technician at the Flint factory and instrumental in introducing A-Safe's barriers in to the company said: "A-Safe has proven time and again that they are superior to steel in all areas, offering my team peace of mind that the barriers are doing their job in protecting the workforce and machinery in a cost effective way." Unlike its steel contemporaries, the A-Safe plastic does not need to be replaced or repaired each time it is hit, saving thousands in maintenance, repair and replacement costs. From A-Safe's first trial with Kimberly-Clark five years ago, the partnership has developed and burgeoned with A-Safe barriers protecting assets across Europe and the United States.

Coca Cola, another internationally renowned company takes a similar strategic safety view. As part of its acquisition of the Abbey Well water brand in 2008, extensive investment was made in its Morpeth bottling site in Northumberland to ensure that the site and the brand continued to go from strength to strength under Coca-Cola. This included upgrading its safety systems.

Peter Stobbs, engineering manager at the Morpeth site explained: "The beauty of A-Safe is that, quite quickly and efficiently, we could replace the existing barriers with A-Safe's yellow polymer traffic barriers which quite clearly demark the pedestrian and vehicle segregation. "A-Safe were agreed as the preferred supplier as they are incredibly capable in understanding our needs and providing the right equipment in response to this and to budget.

Above all they had the right products that are effective in protecting staff and equipment." In busy environments like this, wear and tear can be quite a problem, but thanks to A-Safe's polypropylene construction and built-in memory, the barriers still look like new. Like many other major Blue Chip companies on A-Safe's books, the first installation at the old Malvern site proved so successful that A-Safe barriers have now been installed at a number of other sites in the Coca Cola group.

Marks and Spencer also takes a thorough approach to its health and safety needs with its expensive equipment, large volumes of stock, warehouse vehicles and staff all moving around their new prestigious distribution site in Bradford, all at the same time. The site, employing 1,200, is a key part of their logistical network and one of the biggest distribution centres in the whole of the UK; assets in terms of people, time and effort well worth protecting with state-of-the-art safety. As part of a comprehensive range of barriers, protecting building columns was key. Danny Swann, logistics manager for Capital and Infrastructure at M&S Head Office commented: "I don't think either of the column protectors for Armco looked great, therefore I preferred the A-Safe option." A recurring theme, similar with all these internationally renowned companies, is the longevity of ASafe's barriers. Danny Swann also observed that: "I saw with my own eyes the installation A-Safe did at the Office Depot in Ashton-under-Lyne. A few years on it is still in good condition." Major companies, who value their business and have built reputations by developing, then protecting their investments in people and plant, have learned by experience and taken advice in protecting their business and preserving brand integrity by installing A-Safe barriers as part of their ongoing safety measures. Be smart, be safe, be A-Safe.
MORE FROM THIS COMPANY