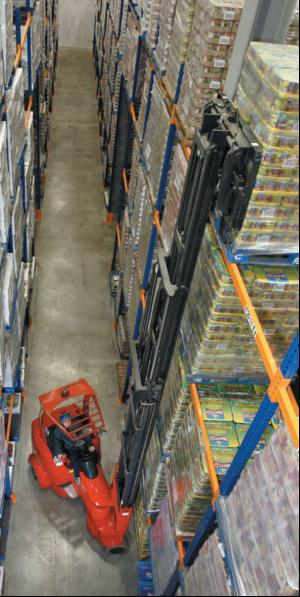 The new model is offered in a choice of 1250mm and 1350mm chassis widths and, thanks to its unique heavy duty vision tilting lift mast design, the Flexi HiLOAD can lift loads of 2.5 tonnes to heights of 9.5 metres.

The electric-powered Flexi HiLOAD incorporates AC technology to ensure optimum battery efficiency and minimal maintenance costs. The truck is also supplied with a high capacity battery that lets the Flexi HiLOAD maximise time between recharges which, in turn, means that even over the longest shifts the HiLOAD maintains the highest standards of performance.

Like other models in the Flexi Narrow Aisle range, the Flexi HiLOAD requires minimal manoeuvring in the aisleways.Maximum 'over rotation' and smooth digital encoder steering combine to ensure that one turn is all that is required to enter or de-stack a pallet which results in the fastest operational throughout and efficiency.

As well as the ability to work in the narrowest aisles, the Flexi HiLOAD can be used like a counterbalanced machine - both inside and outside. This dual purpose functionality adds the ability to load and unload lorries and deliver pallets directly into the racking in a single operation. By doing so, it increases efficiency and productivity while abolishing double handling and the costs associated with operating a bigger truck fleet than is necessary.

Flexi's sales and marketing director, John Maguire says: "Bulk foodstuffs, raw materials and part processed products are often heavier than the typical load in the retail sector. The HiLOAD will be welcomed in industries where high pallet weights are common."
MORE FROM THIS COMPANY