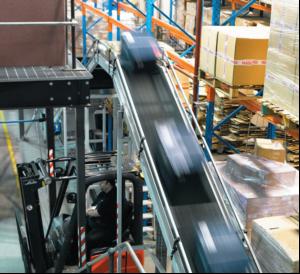 CI Logistics has upgraded materials handling operations at the M&Co distribution centre in Glasgow. These developments have trebled the capacity of tote movements on the outbound conveyor, improved throughput on the inbound conveyor and increased the company's efficiency in unloading containers by 10%.

Established in 1834, M&Co (previously known as Mackays) is one of the largest privately owned fashion retailers in the UK, with nearly 300 stores nationwide and an online presence. The company moved into its dc in Inchinnan Business Park close to Glasgow airport three years ago.

The facility has a 100,000 sq ft ground floor and one of the largest mezzanines in Scotland at 85,000 sq ft. It is the second time that M&Co has selected CI Logistics for a contract; the company was initially chosen to create the bespoke handling and storage solution for the dc. The original solution consisted of hanging garment storage and movement for 650,000 garments on the mezzanine floor together with carton/tote handling and transport on the ground floor, controlled by an integrated software system.

With M&Co's success reflected in a 2009 turnover of £200m, the company has continued to expand its retail business both on the high street and online. The increased sales volume was putting pressure on the busy dc and faster throughput was required to keep pace with demand.

To alleviate the situation, a telescopic boomloader was purchased from CI Logistics. Bryce Howie, M&Co's IT and distribution director, says: "Replacing our old boom with this, much more functional one, is a great improvement. It has hydraulic 'lift and lower' which means that we can easily adjust it to a usable height and fully extended it is 18m long which stretches right into the back of containers, making offloading much more efficient for us.

"When you marry that to the improvements we've made with CI Logistics to the zoning on our inbound conveyor - three large zones have been converted into six short zones, it means that we achieve higher throughput on intake. The additional accumulation of inbound boxes flows much better giving us greater capacity on the conveyor. This speeds up the time it takes to unload a container by around 10% and when you have as many deliveries a week as we do, that makes a significant difference." At the outbound sector of the DC, there were a number of restricting factors that needed to be addressed. Close to the outbound area there was a double gate in the conveyor to provide forklift truck access to a racked area. The area also houses the company's recycling equipment, a plastic compressor and cardboard compacter. To reduce disruption to the outbound flow of totes, recycling was done in break times.

The double gate also served as an emergency exit. To ensure it could be lifted easily in an emergency situation, the gaps between the totes on the outbound conveyor had to be large enough, another factor which was slowing down output.

This was compounded by the fact that there was a bottleneck at despatch because the operatives could load more totes onto the conveyor than could be processed through the chain transfer system to the three loading bays.

Bryce Howie explains the solution that has been implemented.

"The answer was to install an up and over belt conveyor which forms a bridge where our double gates used to be and to change to switchsorter technology to replace the chain transfer system to our despatch bays.

"The work has now been completed by CI Logistics and as a result we have been able to increase the conveyor speed to give us faster processing of the totes all the way through outbound. The bridge has facilitated a much more flexible and safer way of working as we have unimpeded access to our racking, recycling machines and emergency exit." He continues: "The three new switchsorters mean that we can either load one vehicle faster or we can load more than one vehicle at a time, something we could never really do before.We are now maximising our output as the conveyor modifications in outbound have significantly speeded up our procedures; in fact they have trebled our output capacity."
MORE FROM THIS COMPANY