LED lighting has saved money for March Foods both in terms of energy used and maintenance carried out, with payback estimated at less than three years March Foods md Paul Cope had significant problems lighting his faci 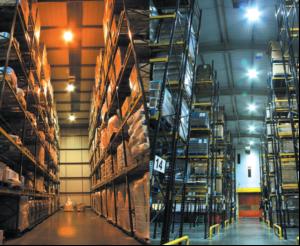 LED lighting has saved money for March Foods both in terms of energy used and maintenance carried out, with payback estimated at less than three years

March Foods md Paul Cope had significant problems lighting his facilities. He has two 3,250 square metre warehouses and had a total of 84 450W HPS lamps operating 24/5 and Saturdays.

"Even though we are not constantly in and out of all bays in the warehouse all the time, the old lamps couldn't be switched off as they took 10-15 minutes to re-strike, so I wanted a more energy efficient solution," he says.

"And to be honest, the lighting was getting so that Lord Lucan could have hidden in our warehouse! Then there's the maintenance problem.With 15 metre high ceilings (49 ft) you need to bring in a cherry picker to replace failed lamps and you can't have people working underneath. That means we'd typically wait until 4-8 lamps had failed before hiring the scissor lift over a weekend to replace them. This was costing about £2,000 annually." He also had issue with the fragility of the HPS lamps. They hung about 4-5 feet from the ceiling, which put them in the range of an extended pallet truck.

Cope examined LED lighting with installer Tom Klimes of Interior Control, who presented him with an LED High Bay unit from Dialight, a UK based company specialising in applied LED technology.

Interior Control replaced the 84 x 450W HPS lamps on a oneto- one basis with Dialight's DuroSite Series LED High Bay. This 150W fitting features eight arrays in an oval pattern that enables it to direct light efficiently with less wastage and delivers an immediate power saving of 66%.

Unlike HPS, the LED lighting has instant-on ability, so it works well with occupancy sensors and this has further increased energy saving to 72% as well as reducing carbon emissions by over 100 tonnes per year. The oval pattern of the arrays also means less wasted light on racking and more directed at floor level in the aisles where 110 lux was measured under the HPS, which had dimmed over time, increasing to 221 lux after the installation of the LED High Bays.

Klimes says: "We've removed the maintenance burden by fitting LED lighting, as Dialight's High Bays are warranted for five years of continuous performance and you can expect them to last ten or more if they're not in use 24/7. Also, they hang only two feet from the ceiling and are very robustly constructed, so the lights are no longer vulnerable to being clipped by extended pallet trucks.With LED lighting you can fit and forget." Interior Control could have got away with fitting two LED for three HPS rather than onefor- one, but chose instead to avoid the cost of rewiring.

While some may say the warehouse is overlit, the approach has won favour with the warehouse staff, with one reporting he feels noticeably less tired at the end of a night shift.

Klimes adds: "For this job we went straight for an LED solution and Dialight's High Bays were the only ones we liked. You can see the quality - they're solidly built, durable and they come with a five-year warranty from an £80 million UK-based company rather than a three-year warranty from somewhere in China. They also incorporate top quality Cree LEDs and the drivers are well built to a good specification. All in all a sound product and the customer service people are great to work with." As a British SME,March Foods was able to have its LED installation funded by a 4-year interest-free loan of £38,000 from the Carbon Trust which offers a £1,000 loan for every 2.5 tonnes of CO2 saved, so the capital expenditure is effectively funded by the energy savings. Having originally underestimated the energy savings to be made from using occupancy sensors Cope now estimates that payback will take less than three years and may even be six months sooner than that when movements in electricity prices are taken into account. He reasons that with this sort of payback period it makes sense to retrofit LEDs even if you have a lease of 5 years or less on your building.

Cope concludes: "We're delighted with our LED lights and the five-year guarantee is very important for us. I insist on a spotless warehouse, so I really like the brightness. In fact we're now thinking of going LED in the loading bay between the warehouses and even in the offices."
MORE FROM THIS COMPANY