Jungheinrich releases lithium ion-based model in a move heralded as a step change in forklift design. 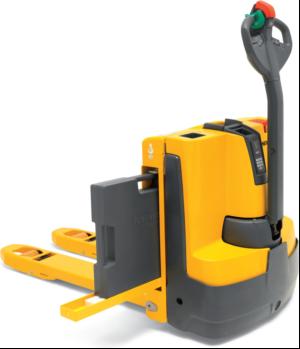 Jungheinrich has announced what it believes to be one of the most significant developments in forklift truck technology for many years.

Following successful trials Jungheinrich's new lithium ionpowered pallet truck - the EJE 112i - is now in production and available to order.

Lithium-Ion technology offers a number of significant environmental and productivity benefits over traditional lead acid batteries. The battery unit itself, for example, is radically different from a lead acid battery. The battery used to power the EJE 112i weighs just 14kg. It looks very much like a briefcase and can be handled easily without lifting gear.

Charging is quick and simple - it takes just 30 minutes to deliver a 50 per cent charge and the battery is fully charged within 80 minutes. The short charging times enable more flexible truck utilisation and 'opportunity charging' - something that will be particularly welcome at sites running multiple shifts.

A single charge is sufficient to power the truck through a typical eight hour shift and, importantly, when it comes to recharging, a dedicated charging bay is not required. The battery is simply removed by hand from the truck and placed within a recharging docking device that can be positioned near a power supply anywhere within the building. The simplicity of the recharging process reduces the need for dedicated battery charging room personnel.

The smaller and lighter battery means that Jungheinrich has been able to dramatically reduce the size of the truck's battery compartment and, therefore, shrink the truck's overall dimensions. The length of the EJE 112i is 425mm - which is over 70mm less than a comparable model with a similar capacity powered by traditional lead acid technology.

The truck weighs notably less too. The combined weight of the EJE 112i and its lithium ion battery is just 289kg - some 30 per cent less than the weight of a lead acid powered model of the same load capacity. The lightness of the new model makes it particularly suitable for loading and unloading lorries with taillifts.

Jungheinrich has been at the forefront of developments in lithium-ion fuel cell technology for many years: a prototype of the new model EJE 112i was first shown over three years ago, but the company says it is the first forklift manufacturer to go in to production with a lithiumion powered truck.

"We have been researching alternative fuels for a long time and believe that with its rapid charging, long running times and compact truck dimensions our lithium ion powered pallet truck will be welcomed by truck users in all sectors and of all sizes." Lithium ion batteries have been used for many years in consumer electronics but have been growing in popularity for military, electric vehicle and aerospace applications. Lithium ion batteries have several advantages over traditional lead acid batteries. Namely they have a higher energy density which means that for their size or weight they can store more energy.

Lithium ion batteries also have a low discharge rate so they retain their charge for longer.

The Lithium Ion powered EJE 112i was among several new products unveiled by Jungheinrich at the recent CeMAT exhibition in Hannover (see box).
MORE FROM THIS COMPANY