A series of Stertil Stokvis RapidRoll doors, type RR600 Ultra, is relied upon by British Gypsum to support the company's mining operations in East Leake and Barrow Upon Soar in Leicestershire. The RapidRoll doors have 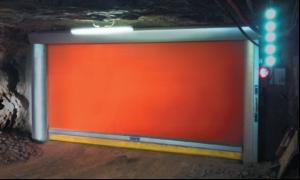 A series of Stertil Stokvis RapidRoll doors, type RR600 Ultra, is relied upon by British Gypsum to support the company's mining operations in East Leake and Barrow Upon Soar in Leicestershire.

The RapidRoll doors have been installed over the past four years to provide access between different sections within the mines.

Operated manually by a simple pull cord located on each side, the doors ensure fast-acting access for personnel plus a range of vehicles including pick-up trucks, mining machines and mobile buckets.

RapidRoll are fast-action industrial doors designed for hightraffic areas where fast operating speeds and frequency of use are major requirements. Other benefits include the reduction of energy costs, draughts and noise to improve safety and comfort for personnel.The RapidRoll 600 Ultra offers opening and closing speeds of up to 3.2 and 0.8 metres per second respectively and is available in a range of standard sizes up to 6 metres x 6 metres. Significantly, this door's modular design enables it to be custom-configured for a variety of applications.

British Gypsum decided to specify the RR600 Ultra to replace a set of electro-hydraulic doors following an operational problem.

The doors are covered by a scheduled maintenance programme.

One particular feature of the doors is said to have proved invaluable in this application. Air pressure within the mines fluctuates greatly and, at times, can be significantly high.

However, the Class 3 wind resistance classification of the RR600 ensures no reduction in performance plussafety and security.

In addition to the underground use of Stertil Stokvis RR600 doors, British Gypsum relies upon a number of other similar RapidRoll doors to provide controlled access to buildings on the surface.
MORE FROM THIS COMPANY