Don't do forklift inspections by half, says scheme provider 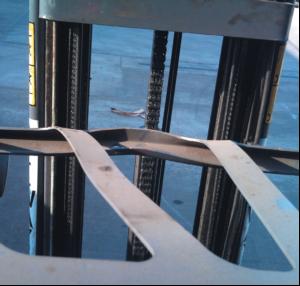 Industry experts have voiced their concerns over the validity of some Thorough Examinations following the discovery of a fork lift truck which was given a clean bill of health by an inspector - despite the presence of serious structural damage.

Just weeks later, the truck's poor state of repair, which rendered the truck unsafe and unlawful, was discovered during a routine service carried out by an experienced fork lift truck engineer who, fortunately for the customer, happened to be qualified as a Competent Person for the Thorough Examination of fork lift trucks under a scheme developed by the industry's own experts.

The watchful engineer quickly identified visible damage to the truck's overhead guard which could have compromised protection against falling objects such as laden pallets displaced at height. As a result of further investigation he also identified hitherto unnoticed cracks to both the chassis and the carriage.

Moreover, because he was so knowledgeable about fork trucks the service engineer also identified the cause of the damage to the overhead guard: apparently it was being used as an anchor point for towing a 7.5 tonne lorry! "For the stress to have caused this damage to the guard it is quite likely that other structural damage will have been done to the fork lift truck, some of which may put the operator at even greater risk," explains Chas Day, technical manager of CFTS, which administers the scheme to which the vigilant engineer is accredited. "Yet the owner of the truck was completely unaware of any problems. Having been told that his truck had passed its Thorough Examination he would, quite naturally, have expected it to be operating safely and legally. However, the extent of damage to this particular truck meant it was a potential killer - and almost certainly unlawful.

"The reason this went unnoticed is that under some inspections - including the original one undertaken on this particular truck - only those items covered under LOLER 98 legislation such as mast, chains and forks) are checked. In the view of CFTS and most experienced fork truck specialists that really is literally doing just half the job. How can anyone claim to have properly inspected a truck for safety when those items that come under PUWER 98 - such as overhead guards... steering...

even brakes are simply ignored.

"It was to create a rigorous and truly comprehensive inspection procedure that CFTS was created by the British Industrial Truck Association (BITA) and the Fork Lift Truck Association (FLTA) in co-operation with the Health and Safety Executive (HSE). It is our belief that safety must never be compromised. There cannot ever be any half measures.

"Indeed, the issue goes further than this. If the culture at the operator's site allows or even encourages this sort of action then what other risks are being taken? A properly conducted Thorough Examination - carried out by a specialist rather than a generalist - can help to highlight a variety of dangerous operational activities. As a result, the truck owner benefits from added value by using a CFTS accredited company with a competent person who knows and understands fork lift trucks.
MORE FROM THIS COMPANY