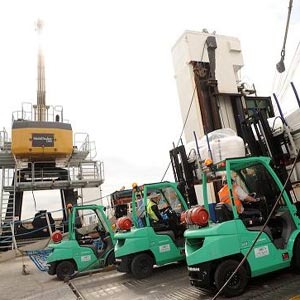 Each month, up to 4,000 tonnes of loose sugar is transported by sea from the sugar manufacturer's East London dock. Solent Stevedores has been responsible for ensuring that its customer's products are moved swiftly and efficiently from warehouse to ship container holds.

After careful consideration, he chose to work with the premier Mitsubishi Forklift Trucks dealer for the South East, Bronze Mechanical Handling. â€œThey were able to deliver us with the best products, the best turnarounds as well as the best after sales service.â€

Bronze's sales director Chris Slater carefully reviewed the application with the customer. â€œSilvertown is a site that really sorts out the best trucks from the rest,â€ says Chris. â€œWet, dockside operations can really take their toll on a truck's performance... especially in such a non-stop application as this. To meet the needs of this challenging application, I knew that only GRENDIA would do.â€