A major UK supermarket chain is trialling a truck stability device developed by loading systems specialist, Transdek. The Load Weight Monitor (LWM) is designed to maximise the safety and efficiency of double-deck dis 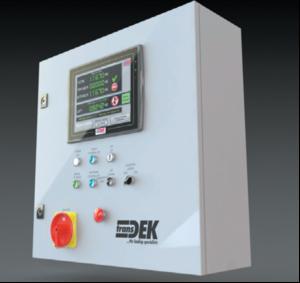 The Load Weight Monitor (LWM) is designed to maximise the safety and efficiency of double-deck distribution operations.

According to statistics from the Transport Research Laboratory, over 500 commercial vehicles roll over each year in the UK, resulting in 40% of all fatalities to HGV occupants.With a higher centre of gravity, double deck trailers are at greater risk of rolling than single deck models.

Transdek's monitor measures the weight and, more importantly, the distribution of product on both decks during the loading cycle, to ensure the payload is properly balanced for maximum stability.

"Without knowing the distribution of payload on a double deck trailer, the vehicle may easily run within its maximum gross weight limit but with an excessive proportion of that payload on the upper deck, particularly in medium-density mixed grocery distribution operations," says Mark Adams, managing director of Transdek.

"Our Load Weight Monitor measures the weight and distribution of goods on the upper and lower vehicle decks to within a 1% tolerance, records and stores this data, and provides a driver print-out as proof of load." Weight parameters are set according to the type of vehicle being loaded, and alarms sound to warn if these are exceeded on either the upper or lower vehicle deck, or both.

All of this information is displayed on the LWM's LCD touchscreen.

In order to avoid overloading the larger cube, many operators also under-fill double-deck trailers by as much as 15% to avoid the cost, time delays and disruption of re-loading vehicles that are turned around at the weighbridge. The monitor optimises operational efficiency by allowing vehicles to be accurately and safely filled to both maximum volume and weight capacity.
MORE FROM THIS COMPANY